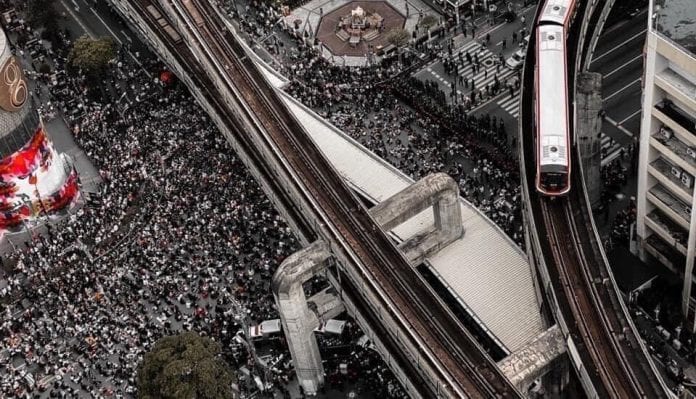 Police and authorities have been struggling to try to control the huge amount of protesters who continued the rally at the Ratchaprasong Intersection, in central Bangkok.

The capital is currently under the State of Emergency declared by the government in the early hours of this morning, is on edge this evening as huge crowds swarmed into the capital’s main shopping district.

At this stage the protesters have filled a large area of Ratchadamri Road after being blocked by police to assemble at the Ratchaprasong Intersection. The estimated of 5,000 protesters is yet to be confirmed as it’s the figure reported by two leading news media but is not official.

Around 21:00 hours, the protest shows no sign of dissolve, and a large numbers of university and school students also headed to the intersection to join in the protest. Most were still in their school uniforms and even proudly posed to police whose main ‘weapon’ was their cameras which they say will help them identify protesters and supporters.

Yesterday’s continued protest at Ratchaprasong is in defiance of the State of Emergency which stated that not more than 5 people could assemble following the declaration. Although no official estimates are currently available, obviously there are more than 5 people who gathered in the evening’s assembly. People attending the protest were openly displaying the 3 finger salute, the defiant symbol of these protests, and yelled “release our friends” and “down with dictatorship” at the attending police. In the early hours of this morning more than 20 people were arrested in relation to yesterday’s protest and march.

After being initially blocked by police, the crowd moved onto the adjacent Ratchadamri Road.

Protesters also shouted “my tax money” – a controversial chant that was yelled at a yellow Rolls Royce as it passed through the protest route late yesterday afternoon in a 200 metre-long Royal Motorcade.

Rally leaders diffused this afternoon’s rising tensions by urging the protesters for “calm” and emphasised a non-violent approach to this and their other protests. So far, over the 3 months of protests, restraint has been shown on both sides and, despite a few minor scuffles, there has been no major violence or injuries.