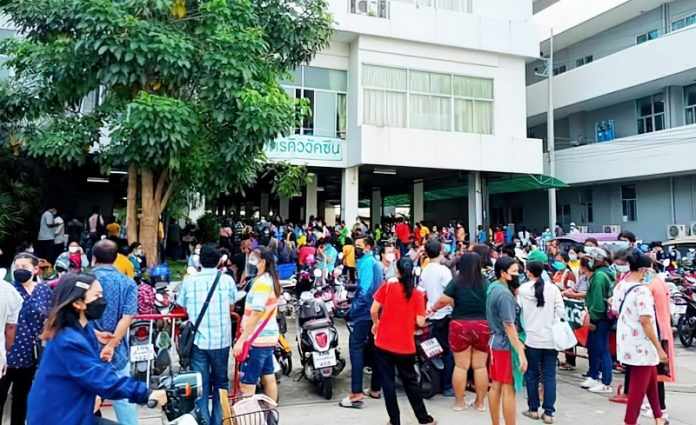 Hundreds of people were left disappointed after waiting in vain to receive vaccinations at Prachuap Hospital.

Images shared to social media on Friday (July 30) showed crowds gathered at the hospital with what appeared to distinct lack of social distancing.

Despite waiting for hours, many people did not receive a vaccine.

Initially, Prachuap Hospital had been due to administer doses of the Sinovac vaccine to 1,700 people who had registered via the Mor Prom application.

Those due to receive the vaccine were either aged over 60, had an underlying health condition or were pregnant.

However, it was estimated that 3,000 people queued up at the hospital.

The vaccines were not due to be available to the general public without appointment.

In event that some people did not attend the appointment, then those vaccines were to be given to people who were next on the waiting list.

However, word got round the local community that left over vaccines would be available to people on the day and that they only needed to present their Thai ID card, rather than register via the Mor Prom platform, in order to receive the jab.

This resulted in hundreds of people queuing outside the hospital early on Friday morning in the hope of receiving a vaccine.

However, health officials said that the information people had been given was incorrect and that vaccines are only administered by appointment. Officials stressed there are no walk-in vaccine services available in Prachuap Khiri Khan.

This meant that hundreds of people waited in vain for vaccines that were not even available to them in the first place.

The situation at Prachuap Hospital comes as the province is well behind its target of vaccinating 70 percent of the population before October 1 in order to reopen to vaccinated foreign tourists.

Last week, Dr. Pornrawee Seeleuangsawat a key figure in the “Hua Hin Recharge” plan to reopen the holiday resort to foreign tourists said the target to open by October 1 is unlikely to be met.

Dr Pornrawee said the aim was to vaccinate 100% of workers in the city and 70% of the general public.

However, it is understood that less than 12% of the people in Hua Hin have received the vaccine.