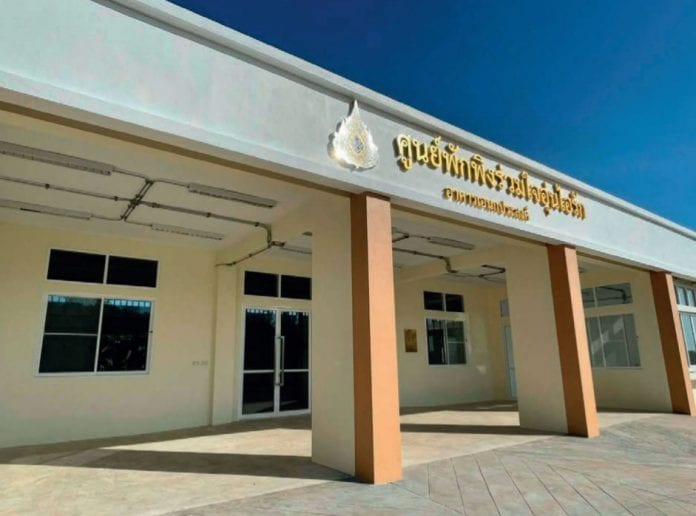 Last month, a meeting was held by the Prachuap Khiri Khan Provincial Water Resources subcommittee, to discuss the situation of water supply and the preparation of a flood response plan for this years rainy season. Prompiriya Kitnuson, Deputy Governor of Prachuap Khiri Khan province presided over the meeting.

Currently the 9 major reservoirs in Prachuap province have a total water volume of 244 million cubic metres out of a total reservoir capacity of 500 million cubic metres, (49%), which is considered a good condition for this time of year. Now we have entered the rainy season, and rain water is e-pected to flow into the reservoir continuously, this condition can only improve.

As for the prevention of flooding problems, 10 water pumps have been installed at the recurring flooding areas, namely Hua Hin district 2, Mueang Prachuap district 2, Bang Saphan 4, and the other 2 points at Kui Buri district, and will also install 2 more ‘water pushers’ in front of Wat Khao Lan Thom and in front of Vana Nava water park in the Nong Kae Subdistrict of Hua Hin, to help speed up drainage when required. In addition, 6 mobile ‘water pushers’ will be kept in reserve at the provincial irrigation project office, these will be ready to be deployed for urgent use if flooding occurs in any area. During the past drought season, 18 canals have been dredged in every district to optimise drainage during the coming rainy season.

Decha Ruang-On, head of the Disaster Prevention and 4itigation Office in Prachuap province, also reported on the progress of the construction of a temporary shelter for potential victims in the coastal region of Bang Saphan district, the construction of the accommodation building has now been completed thanks largely to his Majesty King Maha Vajiralongkorn who donated THB 20 million of personal property.

The installation of electricity and water supply is done, and currently the access road is under construction and expected to be officially opened at the end of July, well within time to cope with the expected heavy rainfall during the October/ November period. The shelter can accommodate up to 300 victims and those involved with the Water Resources sub-committee are confident they are ready to respond in a timely manner as events occur, they have also trained 50 volunteers in each locality to help when needed.