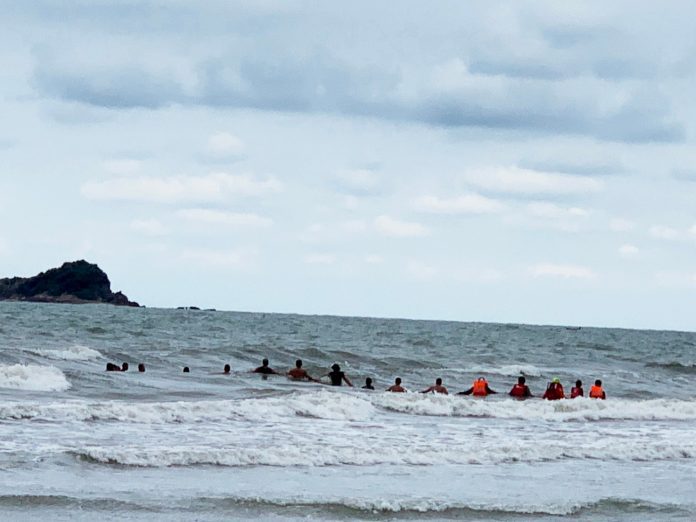 Rescue workers were continuing their search for a 14-year-old boy who went missing while swimming at Suan Son Beach in Nong Khae on Monday (May 2).

Rescue workers from the Sawang Hua Hin Thammasat Foundation, along with a team of specialist divers, officers from Hua Hin Tourist Police and soldiers who were drafted in from Lopburi province took part in the search operation which began at around 2pm on Monday afternoon.

A woman at the scene who said she was the boy’s aunt told police that their family of eight people had traveled to Hua Hin from Samut Sakhon province for the long holiday weekend. The aunt explained how the missing boy had eaten with his family on the beach around noon before going back into the water with another child.

The other child returned to the beach to say that the pair had got into difficulty in strong currents and that the 14 year old boy was missing.

The alarm was then raised and a search operation was set up in conjunction with the Thanarat Camp Infantry Center.

Five of the beach jet ski operators also took part in the search.

Rescue workers on Tuesday (May 3) found the body of a 14 year old boy who went missing in the water at Suan Son beach on Monday.

The boy’s body was found at 10am on the beach near Pranburi Forest Park.