Multiple shootings and attacks on police officers were reported over the weekend in Narathiwat, a province in Thailand’s deep south bordering Malaysia that has been disturbed with violence for years due to the religious separatist insurgency.

The Bangkok Post said the attacks are part of a “fresh wave of southern violence.”

A gunman fired shots at the Bacho police station. No officers were injured. Bullets from the gun hit a power pole, signboard, and a parked car outside the station.

Officers investigating the scene found round 20 spent cartridges of M16 and 9mm ammunition by a nearby home.

The Bacho police chief Dulyaman Yaena suspects the shooting is related to an incident from over the weekend where a grenade exploded at a police residence in the Rueso district. The explosion damaged 3 vehicles. No one was injured.

A police checkpoint between Narathiwat and Pattani was ambushed on Saturday. Assailants fired 20 shots at police. No one was injured. 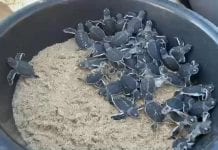