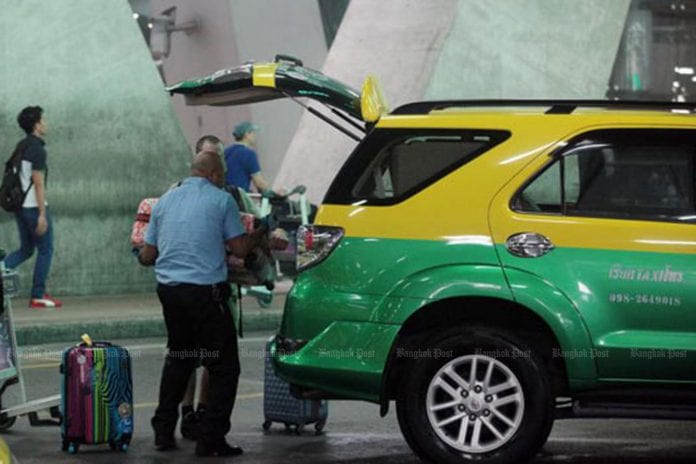 Suvarnabhumi airport taxi drivers have threatened to withdraw some services starting on Nov 1 in a protest against what they say is the government’s failure to ensure fair competition once app-based ride services are legalised.

The drivers complain that the Transport Ministry and its Land Transport Department have declined to discuss assistance for conventional taxi drivers as promised. The department is preparing to legalise app-based services such as Grab by March.

Drivers’ representatives had been seeking an increase in fares and airport surcharges but received no response, said Sadit Jaithiang, president of the Thai Public Taxi Association.

Passengers with more bags would have to call another taxi for service, he said, adding that the “symbolic expression” would start on Nov. 1.

Taxi drivers’ representative Santi Patiphanrat said the transport minister had ordered the Land Transport Department to form a committee with cabbies’ representatives to work out solutions for drivers who would be affected by app-based services within a month, but the deadline had passed. The department had not contacted their representatives to invite their input, he said.

Another representative, Pallop Chayinthu, said he opposed a proposal to let app-based service providers set fares at will because that would interfere with taxis’ fare structures.

He also asked the government to require app-based drivers to pick up passengers via app requests only, and prohibit them from waiting for passengers at airports or bus terminals.

Taxi fares have been frozen for six years and drivers also want the government to extend the service time of metered taxis from nine to 12 years, he added.

Taxi drivers plan to rally at the Transport Ministry on Nov. 7 to inquire about progress on solutions for their problems, Mr. Pallop said.