BANGKOK – The speed limit for roads with four lanes or more will be raised from 90 kilometres per hour to 120kph. 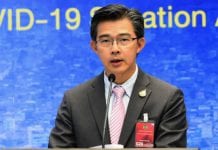