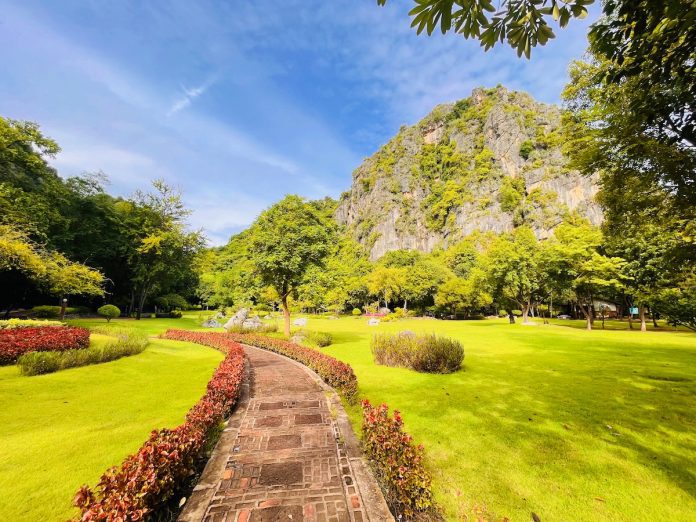 Sometimes you fancy getting outside and immersing yourself in nature, without having to trek too far away.

Luckily, in and around Hua Hin we have some amazing forest parks where you can get your fix of the great outdoors.

Located just a 30 minute drive from Hua Hin in nearby Cha Am is the Khao Nang Phanthurat Forest Park.

It boasts a beautifully landscaped and maintained greenspace, a number of hiking trails, and viewpoints with stunning vistas of Cha Am and the surrounding area. There are two fairly easy hiking trails that would be suitable for most people.

The shortest trail and the most accessible is the 150 metre climb up recently refurbished concrete steps to the Phanthurat Mirror viewpoint, which once at the summit offers great views out towards Cha Am beach.

The short jaunt takes no more than 15 minutes to reach the summit, as you pass the Nang Phanturat Shrine and Crematorium along the way.

Up until fairly recently, the walkway up to the viewpoint was made of wood and had fallen into a state of disrepair. However, the whole walkway is now much improved with the addition of concrete steps making the route accessible for most people. The second nature is a little more challenging, but by no means difficult.

The 3.5 kilometre route takes in a number of viewpoints which offer even better views of the surrounding area.

As well as the three viewpoints, the route offers other points of interest, including an opportunity for bird watching, with the park is home to more than 100 different species of birds.

At the front of the park is a large and beautifully landscaped and maintained area set in front of stunning limestone cliffs which make for a spectacular backdrop. Located just outside the entrance to the park is a 10 kilometre bicycle route that circles the perimeter of the park and which is also suitable for runners and walkers.

As is not uncommon for parks and sites of interest in Thailand, Khao Nang Phanthurat is steeped in Thai folklore and tradition.

The name of the park is derived from the “Mae Nang Phanthurat,” which is based on a Thai literary tale called “Sangthong.”

Legend has it that Phanthurat is a giant who disguised herself as a human in order to adopt “Phra Sang” as her son. When Phra Sang visited Phanthurat’s secret lair and discovered mountains of dead animals and human bones, he realised that his mother was indeed a monster – well you would, wouldn’t you?

Terrified, Phra Sang then moved to disguise himself from his mother by dipping into a gold well in order to appear to be a gold coated dead body. He then fled the lair with a magical cane and special glass shoe.

Phra Sang then refused to return to his mother, despite her pleas.

Phanthurat then died before she was able to see her son again.

The story says that Phra Sang cremated his mother and had her ashes buried on the site of what is now the forest park, which is why it is known as Khao Phanthurat.

Anyway, the park is well worth a visit.

Tip – previously the park used to be home to quite a large number of monkeys. We didn’t see any when we visited but it’s something you should perhaps be aware of if you visit.

Entrance to Khao Nang Phanthurat Forest Park is free of charge for both Thais and foreigners. The park is open daily from 8.30am to 4.30pm.