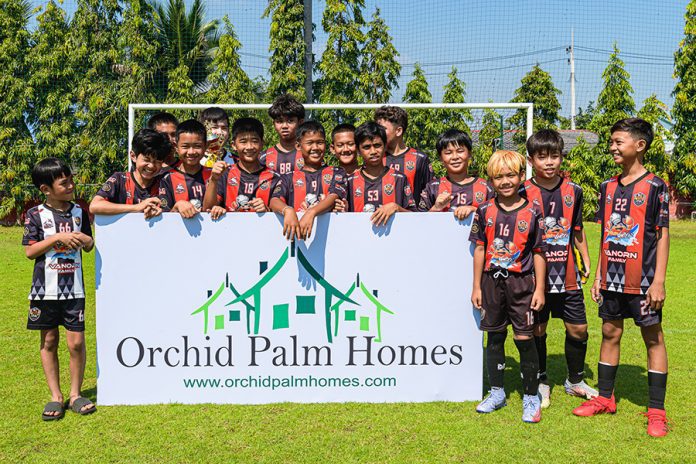 True Arena played host to children’s football on Sunday morning with Under 12 teams in action at the Orchid Palm Homes Cup III. Vanon Kanon ran out as winners, beating Black Mountain 4-2 in an entertaining final.

Black Mountain booked their spot in the final with a comfortable 4-0 win over Shark Boy. Vanon Kanong beat PSG 1-0 in the penultimate round and were very unfortunate to see a goal controversially ruled out in that match. The first half of the final was a tense affair with both teams playing some good football and Vanon Kanong taking a narrow 1-0 lead. The goals started flowing more freely in the second stanza with Black Mountain conceding another three but grapping two as consolation.

Vanon Kanong were worthy winners and Orchid Palm Homes owner Stephen Ayling was impressed by the level of football on display,

“There were some really good players but all the games were played in a good spirit and it is great to see young people getting outdoors and enjoying sport, something that hasn’t always been easy this year.” “There was a fantastic atmosphere and from the players to the parents I think everyone enjoyed themselves. We are grateful to Orchid Palm Homes and True Arena for supporting this event.”