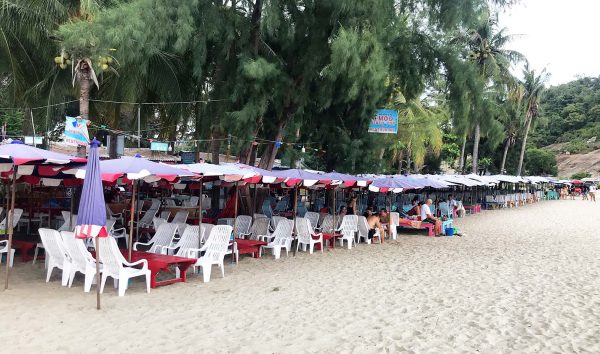 Beach vendors have submitted a request to expand the seating areas available to tourists on Khao Takiab beach.

The written request was submitted to the mayor and discussed by the Hua Hin Beach Organizing Committee from approximately 20 vendors who operate on Hua Don beach in Khao Takiab.

The vendors said they wanted to extend the area currently allocated for sunbeds by a further five metres to accommodate more foreign tourists who like to come to the beach to sunbathe.

However, the Hua Hin Beach Organizing Committee, which is made up of representatives from Hua Hin Municipality, the Hua Hin District Administration Department, police officers and soldiers, said they were unable to overturn the existing rules regarding the boundaries and allocation of sections of the beach for commercial purposes. It was ruled that the area falls under the jurisdiction of the Prachuap Provincial Harbor Office and it would be them that would need to have the final say on the matter.

In the meantime, the Hua Hin Beach Organizing Committee reminded vendors, which also includes shop owners, horse operators and kitesurf business operators that they must close every third Wednesday of the month so the beach can be cleaned and the area can be “returned to the people” as it is a public space.