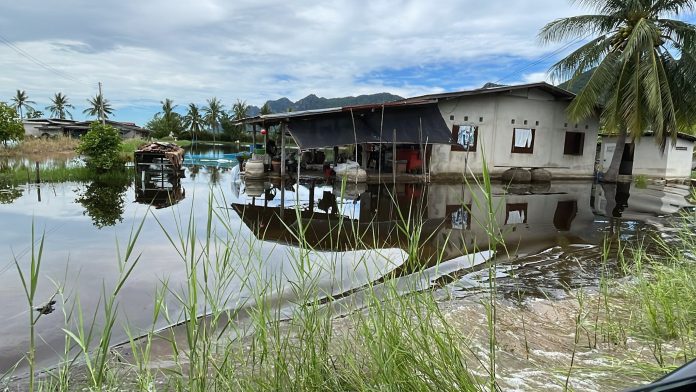 A number of low lying areas in Sam Roi Yot have been inundated following the heavy rain that has fallen in the province in recent days.

On Tuesday, a number of officials from various government agencies inspected the flooded areas and provided support to those affected. Mr. Pairote Meepramoon, president of the Rai Mai Subdistrict Administrative Organization, stated that flooding is a chronic problem in the two subdistricts.

Mr Pairote explained that the area is a basin which water flows through before it enters the sea.

The area floods regularly, especially after it rains heavily. The flood water can remain in place for months at a time, Mr Pairote said.

In a bid to prevent further flooding, a long backhoe was brought in to dig open drainage ditches at three points, each about 5 meters wide and 1 meter deep, to help drain water into the sea more quickly. The concern is that the measure may not be enough to stop more flooding as Thailand enters the wet season and the amount of rainfall increases.

Meanwhile, the Subdistrict Administrative Organization and the Royal Irrigation Department are working on long term solutions to the flooding problem.

The plans centre around the construction of a sluice gate and concrete roads with drainage being installed in the area.