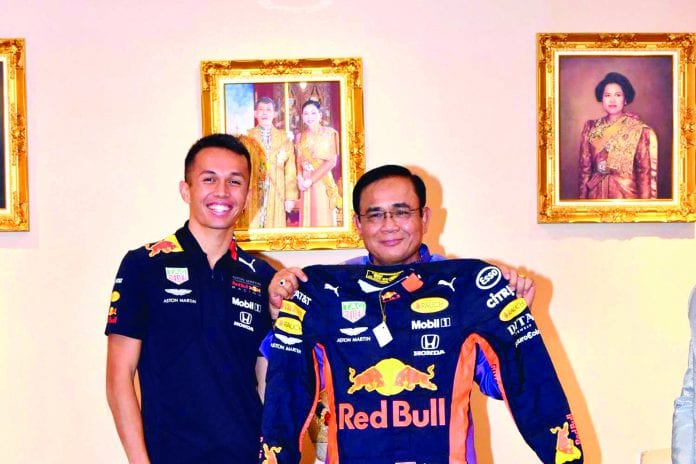 Prime Minister Prayut Chan-o-cha has determined that the Ministry of Tourism and Sports and other state agencies should drum up support for a public campaign to promote Thai-British Formula One racing driver, Alexander Albon Ansusinha

Mr. Albon, now 23, is currently driving in Formula One for Red Bull Racing under the Thai flag. He raced for Toro Rosso for the first half of 2019, before being promoted to Red Bull for the second half of the year, replacing Pierre Gasly who has returned to Toro Rosso.

Speaking during his visit to Government House, where he met the prime minister, Mr. Albon said he is particularly proud of his Thai heritage, the Red Bull driver becoming only the second driver in Grand Prix history to fly the Southeast Asian country’s flag in F1.

One must travel all the way back to the early fifties and note the presence in the history books of one Prince Bira of Siam who first represented Thailand on the F1 grid. While Albon was born in London and raised in the UK, there’s no questioning his allegiance to his mother’s original country. “It’s a big deal for me to be a Thai driver; it’s been a long time since there’s been a Thai in Formula 1 and I’m just hoping to do everyone proud.

“I hope that one day I will carry a Thai flag to the podium when I receive one of the three prizes on behalf of Thai people,” said Mr. Albon, who now sits eight in the drivers’ standings with 42 points. In 2015, Mr. Albon switched to European Formula 3, finishing seventh overall. A year later, ART signed him on to race alongside Charles Leclerc in the GP3 Series, finishing second in the championship.

Mr. Albon was given a seat once again by ART in 2017 to race in the FIA Formula 2 Championship where he finished in the 10th position.