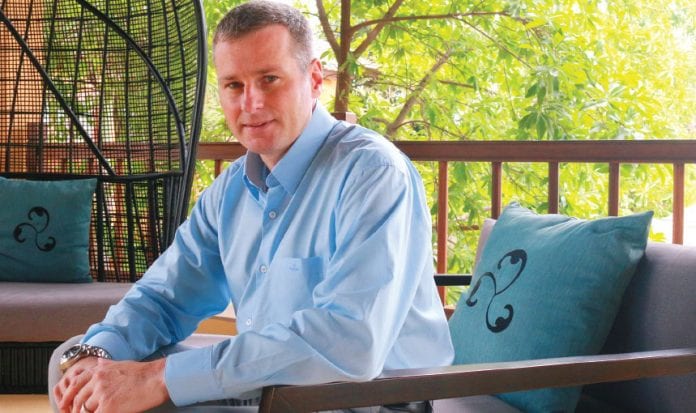 There’s a new vibe in the air at the Mövenpick Asara Resort & Spa Hua Hin. Sven Walter has been at the helm as General Manager since the end of September last year and together with a new management team he is guiding the emergence of this boutique resort as a vibrant oasis in the local hospitality scene.

Sven’s career in hospitality started in 1987 as an apprentice in the kitchen. “Actually the plan was to become an electronics engineer; however, after my two older brothers have both decided to become a chef, I went on a one-week practical training course to see what that was all about. This one-week was enough to change my plans and I signed up for a three-year apprenticeship”.

Thirty years later and Sven’s experience includes time as an Executive Chef and a decade of managing luxury resorts in Asia but with experience in around ten different countries including his native Switzerland. That means a multi-cultural approach with Sven equally conversant in German, French and English and a student of Bahasa Indonesia, in part so that he can effectively communicate with the family of his Indonesian wife. The food and beverage emphasis to Sven’s background has meant concentrating on this vital element for success in the hospitality scene.

That fits well with the Mövenpick ‘brand’ which is universally famous for worldclass cuisine based on almost 70 years of Swiss heritage and culinary expertise. However that name also means chocolate, premium icecream, aromatic coffees and of course, fine Mövenpick wines. Sven says that being active in sports and physical activities is his way of staying ‘grounded’ as well as keeping the waist-line in check. However his proclivity for rock climbing has taken him far above the ground. He’s also been an ice hockey player an underwater diver and lately both Sven and his wife have taken to Muay Thai boxing at a local training school. Having a wife as a sparring partner adds an interesting element to any marital relationship! “In earlier times I played ice hockey, cycled from Switzerland to Paris, I was for many years a mountain climber, so I like to keep myself active for sure.

If there is some free time, I like to spend it mostly with my wife. We enjoy sport; mainly jogging and Thai boxing, nature as well as cooking and a nice wine with it. If there’s a bit more time we like to have short getaways.” Hosting a recent Hua Hin Business Network event has been a part of Sven getting to know the local community as well as to introducing the revamped Mövenpick to the locals. A sultry evening at the beachside Ocean Bar is rapidly becoming a feature of the Hua Hin social scene with plans to expand the appeal of this oasis with more entertainment and more opportunities to sample tropical cocktails, a variety of tapas and the cool seaside ambience. With Sven Walter at the helm, the new vibe at the Mövenpick is a welcome addition to the Hua Hin hospitality experience; welcome to the scene Sven. www.movenpick.com