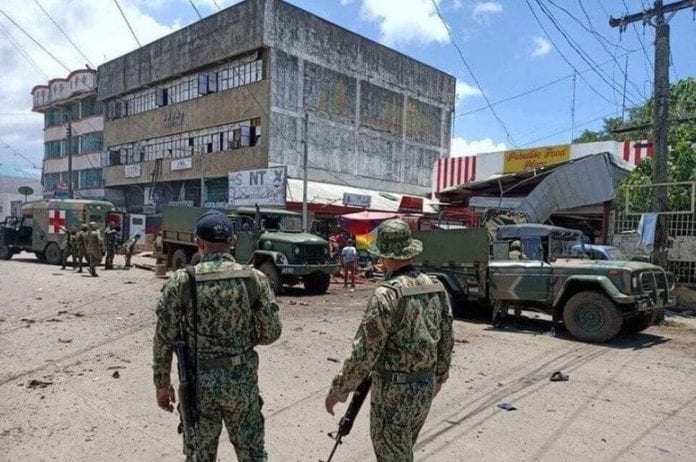 Violence erupted yesterday in southern Philippines as Islamic militants detonated three separate bombs in the region. At least 14 soldiers and civilians were killed, 75 others were injured, despite a step up in security alert.

At least 5 soldiers and 4 civilians were killed in the first attack near a town plaza and a Catholic cathedral. A bomb, attached to a motorcycle exploded midday near 2 parked army vehicles in Jolo, southern province of Sulu.

Then a second blast, came from a female suicide bomber, occurred an hour later killing the bomber and a soldier.

A third unexploded bomb was found in a Jolo market. The entire town was then placed in a security lockdown by troops.

Nearly 40 soldiers, police and civilians were wounded in the bomb attacks, military and police officials said. There has been no claim of responsibility for the attacks, but the Philippines military are blamed an Abu Sayyaf militant commander for the sequence of bombs.

The southern part of Philippines has been racked by decades of violence inspired by religious and ethnic tensions.

Military officials are speculating that yesterday’s bombings may have been staged as a retaliation for the arrest and detention of one of the group’s key leaders.

Abu Sayyaf, a violent group have allied themselves with the Islamic State is considered as a terrorist organisation by the US military and the Philippines.

Army officials believe that members of Abu Sayyaf have declined over the past few years. One of the key leaders of the group has been blamed for kidnappings and beheadings of hostages, including foreign tourists.