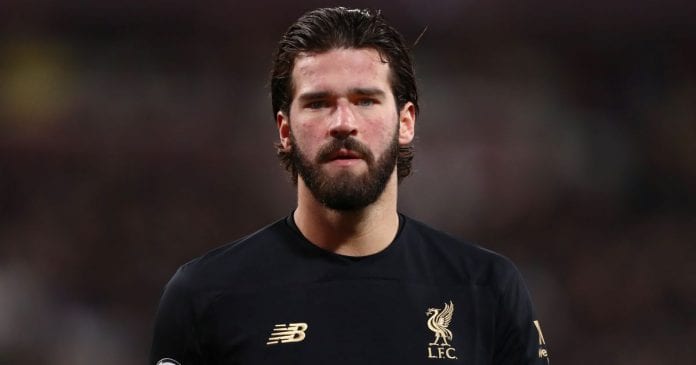 Liverpool goalkeeper Alisson Becker was the hero of the hour as he scored a 94th-minute goal to keep his side’s hopes of a top-four finish alive on Sunday.

Liverpool’s hopes of returning to the Champions League next season looked to be evaporating as the game away to already-relegated West Brom was level at 1-1 each after Mohamed Salah had canceled out Hal Robson-Kanu’s opener for West Brom.

However, Alisson’s moment arrived when he produced a towering header from a corner deep into injury time to give his side a dramatic win.

Tottenham also kept their hopes of playing in Europe alive with a routine 2-0 win at home to Wolves.

Harry Kane’s 22nd league goal of the season and Pierre-Emile Hojbjerg’s close-range finish after Gareth Bale’s shot had been parried into his path, saw them climb into sixth above West Ham, who were held to a 1-1 draw on Saturday.

Crystal Palace won an entertaining end of season game with nothing at stake 3-2 at home to Aston Villa with Christian Benteke, Wilfred Zaha, and young full-back Tyrick Mitchell scoring for the home side, while John McGinn and Anwar El Ghazi netted for the visitors.

Finally, a debut goal by 17-year-old Daniel Jebbison gave Sheffield United a shock 1-0 win away to a lackluster Everton, whose chances of qualifying for Europe have now vanished.

The most important game of the weekend saw Leicester City beat Chelsea 1-0 on Saturday to lift the FA Cup for the first time in the club’s history. The two sides meet again at Stamford Bridge on Tuesday with a place in the top-four very much up for grabs.