The Los Angeles Lakers ended a decade-long wait for a 17th NBA title as they beat the Miami Heat 106-93 to seal a 4-2 series victory.

Victory ties the Lakers with the Boston Celtics for the most NBA championships.

“It means a lot to represent this franchise,” said James.

James becomes the first player in NBA history to be named Finals MVP with three different teams (Lakers, Cavaliers and Heat). Now with four MVPs to his name, he trails only Michael Jordan, who won six.

“Thinking I have something to prove fuels me,” said James. “No matter what I’ve done in my career up to this point, there’s still little rumblings of doubt, comparing me to the history of the game… ‘Has he done this, has he done that?’

“Having that in my head, saying to myself why not still have something to prove, I think it fuels me.” 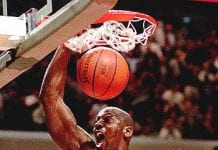