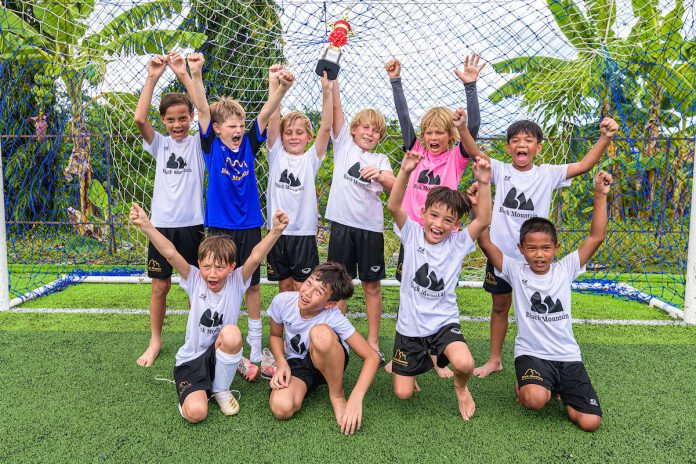 The inaugural Surf 102.5 FM Cup took place at Monkey & Field on June 5th. Five teams faced off in this 7 a side tournament with Black Mountain emerging as the winners.

Both Black Mountain and Vanon Kanong won their first three matches, beating Nong Hoi, Hua Hin City A and Hua Hin City B. They faced off in the final game which was a winner takes all decider.

Black Mountain made a strong start and were putting the pressure on the Vanon Kanon defenders. The breakthrough came when the team in white were awarded a free kick close to the right hand touchline.

Phakin Calermkas, 9, is a master at dead ball situations and looked extremely confident. Sure enough he curled a left footed effort into the top right hand corned to give Black Mountain a 1-0 lead.

Vanon Kanong started to press hard for an equalizer but were denied by some fine goalkeeping from Lev Duisterwinkel, 10. The atmosphere was tense as the game moved into injury time with Black Mountain desperately hanging on to a slender lead. But the contest was settled with the final kick of the game. Archie Wills, 10, burst through from centre midfield and had the composure to pick out Patrick Goyder, 8, who fired in from close range with the ball cannoning off the crossbar and into the back of the net.

It was an impressive showing from Black Mountain who won all three matches without conceding a single goal. Vanon Kanong had to settle for the runners up trophy while Hua Hin City A finished in third place.