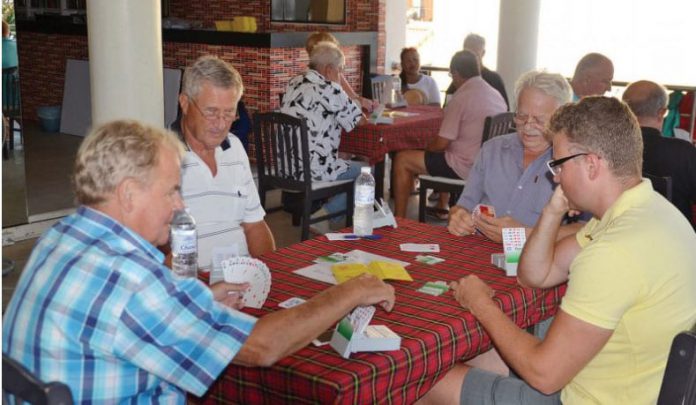 Giving a man his physical, the doctor noticed several dark, ugly bruises on his shins, so he asked, “Do you play hockey, soccer, or some physical sport?” “No,” he answered. “I play bridge with my wife.” There is just something about bridge that seems to be addictive. If you are one of these addicts there’s no need to go ‘cold turkey’ in either Hua Hin or Cha-Am. You can get your fix at three sociable and welcoming Bridge Clubs in the Region. As a strategic ‘trick-taking’ card game, bridge is one of the world’s most popular card games. Bridge has a loyal following of players who compete in competition at all levels, from just socially minded friends though to clubs and even world championships.

According to the Oxford English Dictionary, Bridge is the English pronunciation of a game called Biritch, which was also known as Russian Whist. The oldest known Biritch rule book is dated 1886. Bridge is a card game for tables of four persons. Each players gets a name depending on their location at the table, so that NORTH is partner with SOUTH, EAST is partner with WEST. These partnerships are playing against the opposite side (eg. North/South against East/West). It’s played with a regular deck of cards, so all 52 cards are divided amongst the players with each getting 13 cards. The game itself is about getting as many points with your partner.

“Having sex is like playing bridge. If you don’t have a good partner, you’d better have a good hand.” – Woody Allen

This is not the place for a full explanation of the Rules of Bridge. They can be found online at many different websites and these days there are also online bridge competitions if you want to practice or learn the strategies of the game. If you are an eager Bridge player without a game and this is a ‘gap’ in your life, here is how you can play.

The Cha-Am Bridge Club was founded in January 2011 by some Scandinavian bridge players. Every Tuesday at 2.00 PM the club plays at Max Restaurant on the second level. Scandinavian players tend to dominate but everyone interested in the game is welcome. It’s about a friendly, though competitive afternoon of Bridge; a great way to meet others with a passion for the game.

Footnote: An unnamed Cha-Am Bridge Club Member asked me not to mention that when Members of his Club play against Hua Hin Club Members, Cha-Am players dominate. That’s something that we can’t repeat!