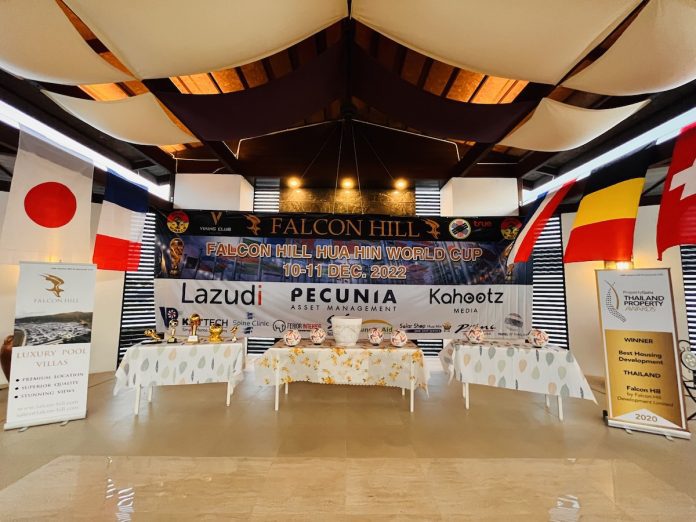 The draw for the one of the largest and most popular expat football tournaments in Thailand took place in Hua Hin on Saturday (Nov 19).

The Falcon Hill Hua Hin World Cup 2022, presented by Viking Club Hua Hin will take place at True Arena Hua Hin during the weekend of 10-11 December, with games being held from 9am to 5pm.

The 7-a-side tournament, which is celebrating its 10th anniversary, will see 192 players taking part, making it the biggest Hua Hin World Cup to date.

Teams are made up of local and expat football players from Hua Hin and Bangkok, with many others traveling from across the country to play in the tournament.

A total of 16 teams will play across two group stages consisting of 8 teams.

There are also 8 knockout finals and Plate Cup State which result in a total of 72 matches being played over the whole weekend. The draw, which was also livestreamed on Facebook, took place at Falcon Hill Hua Hin and put current holders Thailand with former winners Sweden and France in Group A, while Bangladesh, who are flying in specially for the tournament, were placed in Group B alongside Spain, Argentina, Brazil and France.

The Hua Hin World Cup is a not for profit event, the aim of which is to enable football fans and players to come together, socialize and have fun.

Spectators are also welcome with a food and beverages and kids playground also available at the event. Some of the proceeds from this event will be donated to local charity Jungle Aid.

For more information about the great work Jungle Aid does in Hua Hin and throughout the province, visit jungleaid.org.

Anyone interested in making a donation to Jungle Aid can do so via: