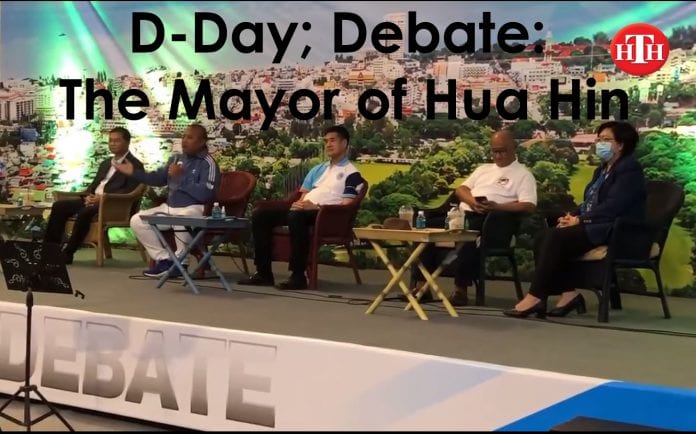 The 5 candidates for Mayor of Hua Hin shared their vision and the development policy of Hua Hin city on the D-Day Debate stage to select the Mayor of Hua Hin. There was a lot of people interest in the audience.

The debate was held in the front yard of the Market Village Hua Hin shopping center with a graduate student in the public sector, Rajamangala University of Technology Rattanakosin (RMUTR)Wang Klai Kangwon Campus was the operator of a Q&A event.

All candidates have demonstrated their vision and creative policies in the development of Hua Hin to the international standard. This is to serve as a prototype for the election campaign of the candidate for Mayor of Hua Hin in a constructive way and showing a positive vision to lead the local administration effectively and in the best interest of the people.

The organisation of this Q&A stage has assigned each candidate for Mayor of Hua Hin to express their vision for 10 minutes by drawing lots. It was not ordered by the number of each candidate. All of them have expressed their policy vision for the specified time.

In the first place show as a vision of education, finance, utilities, waste management, public health, and a COVID-19 prevention measures management. Then, it will answer questions from the public for 3 minutes.

Candidates were asked about their views on the royal development of Hua Hin, solving water supply problems, and attitudes about election corruption in the purchase of the votes.

After the completion of the vision show, the 5 candidates for the Mayor of Hua Hin have joined together to show the symbol of hook each other’s little finger as a promise to create a new dimension of political quarters.