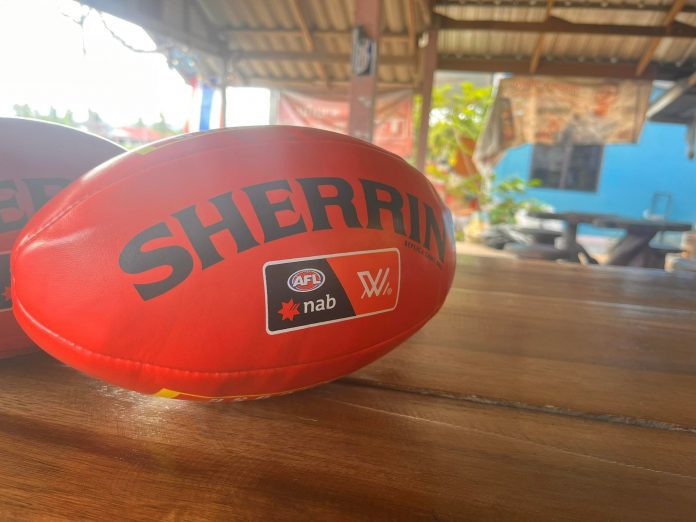 An Australian expat is about to launch Hua Hin’s first Australian rules football club, with an open day to be held in Hin Lek Fai this coming Saturday (Sept 9).

Six-two year old Greg Wass, ‘Wassy’ to his mates, is passionate about introducing the sport of Aussie Rules to people in the local community – both Thais and expats.

“Anyone who wants to kick the footie should come down on Saturday”, Wassy told Hua Hin Today.

Wassy has already agreed the use a local school field and has interest from kids and other young people in the area about taking part.

The idea of starting an Aussie Rules football club came during a conversation over a few beers with friends.

“They told me, if you’re going to do it, do it properly, that was only a few weeks ago and now here we are”, Wassy said.

Since Wassy first had the idea, things have really started to gather pace. More of a challenge was finding equipment, Wassy says it is almost impossible to buy genuine AFL footballs in Thailand.

Wassy, who has a long history in AFL back in Mildura, Victoria, where he had been an umpire since the age of 15, reached out to contacts who were able to supply him with Sherrin footballs.

“We’ll have a total of six footies eventually, and we have had 24 shirts supplied to us from sponsors,” Wassy said.

“We also got a couple of Acme Thunderers, which are the Rolls Royce of whistles for anyone who doesn’t know”, Wassy explained.

In need of coaches

Wassy said eventually he would like the Black Mountain AFL Club to hold weekly training for kids in the area.

“I have already been speaking to a couple of guys about coaching, but they seem pretty interested”.

Wassy said that if anyone reading this is interested in getting involved, particularly with coaching, then to get in contact with him.

In a bid to kick things off for the Black Mountain AFL Club Wassy is organizing an open day and ‘sausage sizzler’ BBQ on Saturday (Sept 9) in Hin Lek Fai (Google Maps link).

Wassy said that anyone with an interest in Aussie Rules should come along, especially expat parents who are interested in getting their children involved in the sport.

Saturday’s open day will begin at 10am with an introductory training session and practice, before the BBQ gets underway from 12pm.