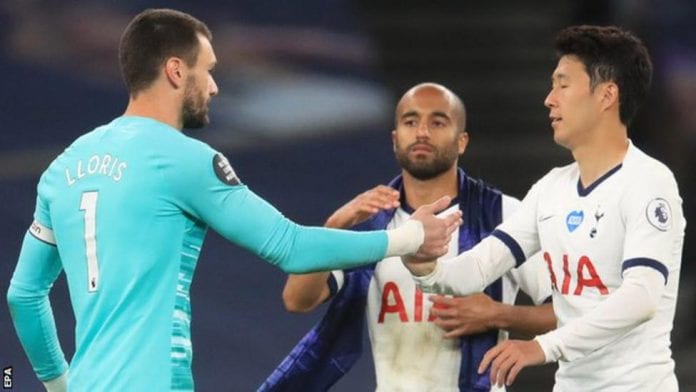 Tottenham manager Jose Mourinho says the half-time clash between goalkeeper Hugo Lloris and forward Son Heung-min was “beautiful” and “something needed for the team to grow up”.

Captain Lloris ran over and shoved Son in the back before the players went down the tunnel, with the pair having to be separated by their team-mates.
But they embraced at full-time after a 1-0 Premier League win over Everton.

Lloris said there was “no problem” after Monday’s match.

An uneventful encounter at Tottenham Hotspur Stadium almost boiled over when France World Cup winner Lloris reacted angrily towards Son, unhappy that the South Korea international for not tracked back to help prevent a chance for Toffees forward Richarlison.

“It just belongs to the changing room – outside you can say whatever you want. What happened between me and Sonny is part of football sometimes,” added Lloris.

“At the end of the game you could see we were more than happy.”

The result gave boss Mourinho his 200th victory in the Premier League, the Portuguese becoming only the fifth manager to reach the landmark.

It came following a poor 3-1 loss at Sheffield United in their previous game, after which Mourinho had questioned the mentality of his players.

“[The argument] was probably as a consequence of our meetings. If you want to blame someone for that it’s me,” said the 57-year-old.

“I was critical of my boys. They were not critical enough with themselves. I asked them to be more demanding of each other.

“Son is an amazing kid. Everybody likes Son, but the captain told him you have to do more and give more to the team.

“It is something needed for the team to grow up. To grow up you need big personalities. When you have that reaction I have no doubts.”