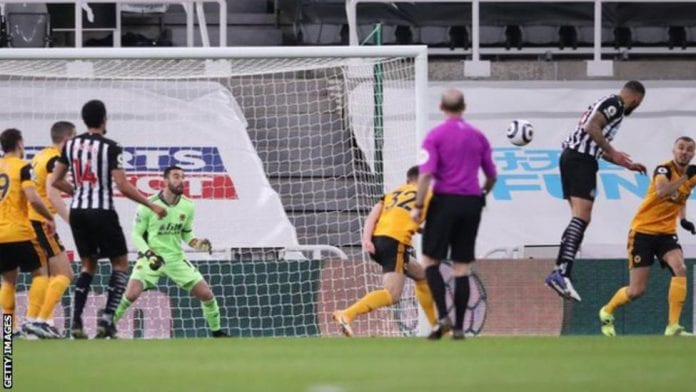 Captain Jamaal Lascelles says Newcastle “need to stop talking and put points on the board” after missing a chance to move further clear of the Premier League relegation zone with a draw against Wolves.

Newcastle boss Steve Bruce was also concerned at losing the influential Miguel Almiron, saying he “fears the worst” about the Paraguayan’s injury.

Almiron was substituted at half-time and Bruce says he will have a scan on Sunday.

Lascelles headed the hosts in front from Ryan Fraser’s cross in the second half and they looked good for their lead after a confident performance.

But Ruben Neves, who had never scored a headed goal for Wolves before, was awarded space to guide Pedro Neto’s delivery beyond Martin Dubravka to earn the visitors a point.

Dubravka, making his first Premier League appearance of the season, may have done better for Wolves’ leveller but produced a superb save to deny Fabio Silva in added time.

Newcastle were left to rue a number of missed opportunities of their own, with Almiron striking the far post after breaking the offside trap early in the first half.

It means 18th-placed Fulham can move within one point of Newcastle if they beat Crystal Palace on Sunday, while Wolves remain 12th.

“We had very good chances and we are lost for words,” Lascelles told Match of the Day. “We got a point but it should have been three points.

“A lot of positives but we need to stop talking and put the points on the board.”