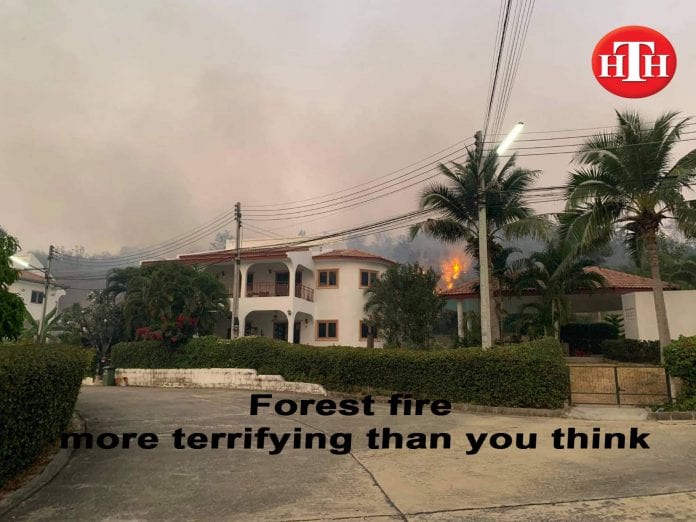 Yesterday late afternoon, a wide-spread of forest fire broke out at the foothills around the Nong Hien and Hin Lek Fai area. Villagers nearby notified the Forest Protection Operation Centre unit and have responded immediately.

Arriving at the scene, the wildfire had spread further towards the east and was difficult for the fire trucks to gain access to the area as the blaze was high on the hill and almost impossible to put it all under control at the same time.

Meanwhile, Hua Hin Today received a call from residents of the Summerland Village saying that the fire had crawled closer to their homes. They had called the local police and the authorities for more than half an hour but no government units have arrived.

Hua Hin Today responded by calling the police hotline 191 and they were very helpful by communicating with the police station and other units immediately.

Eventually, a police officer came to the village and literally looked at the situation, and said that it would be difficult for the fire trucks to reach the blaze up on the hill simply because the truck is too heavy! (What?!!)

Nevertheless, the 191 hotline staff did a great good job by checking in from time to time, telling us to wait a bit longer for help to arrive as the forest fire officers were working hard to put the blaze under control on the other side of the hill.

By this time, the fire is about 80 metres from the houses and residents in the area have started carrying out valuable items from their homes because there’s no help in sight. “If no fire trucks will arrive in the next 10 minutes, the houses will certainly be on fire,” says one of the witnesses.

The villagers have been calling several departments for help but they’ve waited desperately and no units have arrived. After a few minutes, only 1 water truck came and obviously, it is not enough to put out the flame as it was too huge.

In the end, we couldn’t be restless and decided to ask for help from Mr Udon Olsson, where he just gave a call to the Permanent Secretary of Hua Hin, and in less than 5 minutes, huge water trucks from the Fire Department arrived.

It took almost an hour for the Forest Protection Operation Centre together with the Fire Department brigade to put the blaze under control.

From this experience, we can transparently see the problems in the operations within various departments as being time-consuming and lack of proper communications. ing steps that facing the problem situation as well as providing accurate and real information and restlessness.

The officers might be so accustomed to the persistent wildfires that they don’t see how dangerous a situation might be and that could escalate and cause enormous losses of properties and perhaps lives as well.

Finally, a big thank you to the following people who have took immediate actions in responding to the incident: Mr Udon Olsson who is also the candidate for the mayoral election, Hua Hin Permanent Secretary Jirawat Pramanee, and also all the department units involved in handling yesterday’s inferno.