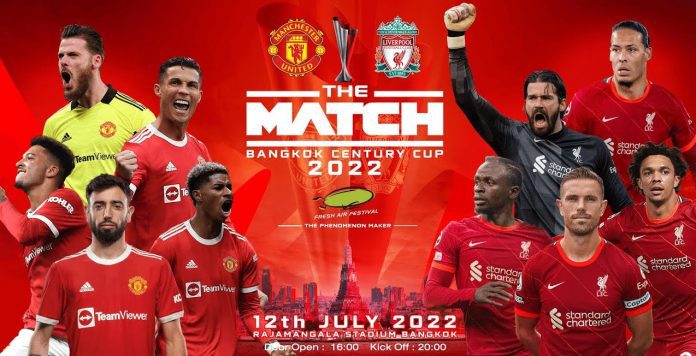 Manchester United and Liverpool play each other in Bangkok this evening.

The game has generated huge interest among fans of both teams in Thailand.

Those lucky enough to be attending the sellout game in person will have paid between 5,000 and 25,000 baht for a ticket.

The game, which has the official title of ‘The Match Bangkok Century Cup 2022’ will take place at the 59,000 seater Rajamangala Stadium, with kick off set for 8pm local time.

Fans are expected to begin to gather at the stadium from noon on Tuesday, with police having advised motorists to avoid the roads around the stadium.

Doors to the stadium will open at 3pm, before Korean pop star Jackson Wang performs a pre-match concert.

The teams are expected to begin their warm-ups from 7pm, before kick off at 8pm.

Matches between Manchester United and Liverpool are dubbed ‘the red war’ by Thai media, such is the fierce and long standing rivalry between the two teams.

But for fans who haven’t got a ticket to attend the game, there are a couple of ways to watch it on TV or online.

There will also be live updates of the match on the Facebook page of the event organiser, Fresh Air Festival.

In addition, the game is also being broadcast on MUTV and LFCTV.

For Liverpool fans, the game will be streamed on the club website and LFCTV GO.

The game will see Erik ten Haag take charge of a Manchester United side for the first time.

While both teams have said they expect to field full strength teams, there could be some big names missing for both sides.

Manchester United will be without Cristiano Ronaldo who has not traveled to Thailand due a family issue.

For Liverpool, Mohamed Salah arrived in Thailand a day later than the rest of the squad after taking part in international duty for Egypt so he too could miss out.

There are, however, set to be many first team players from both teams on show, such as Jordan Henderson, Roberto Firmino and Luis Diaz for Liverpool, while David de Gea, Harry Maguire, Bruno Fernandes and Marcus Rashford are all set to play some part for Manchester United.