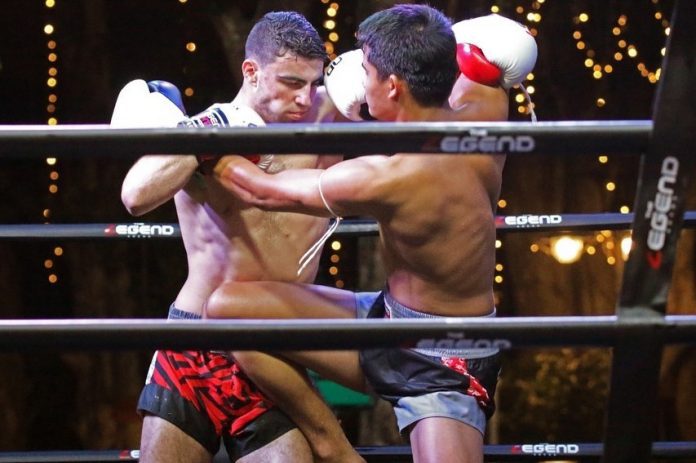 A large, enthusiastic crowd gathered at BluPort on Saturday night (May 14) for the latest instalment of the Legend Fighting Championships.

The event was organized by the Legend Arena, Proud Group, and Bluport Hua Hin, with the night’s proceedings being presided over by former deputy prime minister Mr. Suwat Liptapanlop.

Competing in the event were local and international fighters, including from the UK, USA, Algeria, Estonia and Argentina.

The event saw The Square at the front of BluPort transformed into a Muay Thai arena, with renowned event MC Matthew Deane and former Olympian “View” Yaowapa Burapolchai introducing the fighters to the audience.

Speaking at the opening ceremony, Mr Suwat said: “There are a lot of people here today. I’m confident that everyone will enjoy the event and be entertained while watching today’s battle.

Mr Suwat said the event helps to raise the profile of Hua Hin, boost the economy and bring enjoyment to the people.

“Muay Thai is wisdom; it is the Thai people’s Soft Power.” We have developed the economy by employing music, sports, art, and Thai boxing as the foundation for tourism development.” Mr. Suwat stated.

The Legend Fighting Championships is a series of martial events being held at BluPort, with the next event scheduled to take place in early June. Entry is free.