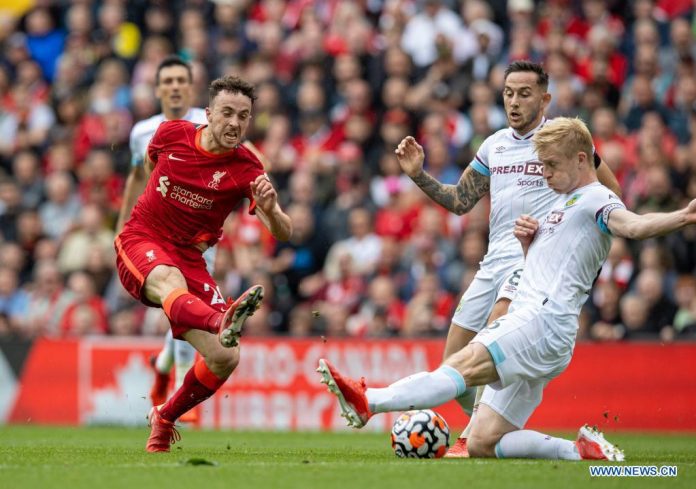 (Xinhua) — Manchester City recovered from their opening day defeat away to Tottenham with a comfortable 5-0 win at home to recently promoted Norwich City on Saturday afternoon.

Jack Grealish scored his first goal since his 100-million-pound transfer from Aston Villa as he finished Gabriel Jesus’ cross at the far post to make it 2-0 in the 22nd minute of the game, but, by then City already led 1-0 thanks to an own goal as Rodri’s low ball put Grant Hanley and Tim Krul in trouble.

Pep Guardiola’s side were in complete control in the second half with Aymeric Laporte, Raheem Sterling and Riyad Mahrez rounding off the scoring.

Liverpool maintain their 100 percent start to the season, but had to dig deep for a 2-0 win at home to Burnley, especially in the first half when the visitors were playing slightly better with Chris Wood causing a lot of problem before Diogo Jota opened the scoring in the 18th minute of the game.

Liverpool made their class tell after the break and a move, which began with Virgil van Dijk and continued by Harvey Elliott and Trent Alexander-Arnold, ended with Sadio Mane netting their second of the game in the 69th minute.

Brentford continued their positive start to life in the Premier League with a 0-0 draw away to Crystal Palace in a game where both sides controlled periods of play without finding the net.

Leeds United twice came back from behind as they drew 2-2 at home to Everton, who took the lead thanks to a Dominic Calvert-Lewin penalty only to see Mateusz Klich level before the break.

Demarai Gray put Everton back in front in the 51st minute, but Raphinha’s left-foot shot with 18 minutes left earned Leeds their first point of the campaign.

Newcastle United’s worrying start to the season continued as they followed their opening day defeat to West Ham with a 2-0 defeat away to Aston Villa.

Finally, first half goals from Shane Duffy and Neal Maupay saw Brighton make it two wins from two games with a 2-0 win at home to Watford.

Over 2,000 runners take part in Top Run event in Prachuap