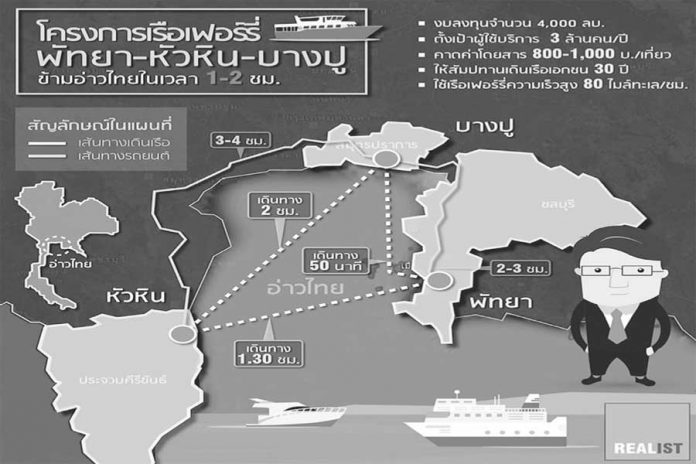 A privately-run ferry service from Pattaya to Hua Hin is expected to start operations on January 1st 2017, the Marine Department says, but this will be initially limited to a daily round-trip and cater only to passengers, not vehicles. (Bangkok Post)

The Marine Department’s Director-General Sorasak Sansombat is reported as saying that Royal Passenger Liner Co. was the only firm to apply for a licence to operate the ferry ride after applications opened on August 9th and passing a selection process on September 30th. However in June this year, Hua Hin Today reported on an expansive proposal to provide a ferry service linking Bang Pu and Pattaya to Pranburi by Siam Logistics Co. Ltd.

The basis of our report was an extensive planning document provided to us by this company. The company stated that it was “waiting for government approval and then we will process the plan”. The plan was to make a 15 billion THB investment. “Now we are ready to invest in the project, and a number of local and foreign firms have expressed interest in joining us,” said Peerapong Prasopsukcharoen, Development and Planning Manager at the time. Recent reports now say the ferry will be operated by Royal Passenger Liner Co. from the Bali Hai Pier in Pattaya to Saphan Pla, the main pier in the centre of Hua Hin, which has recently undergone renovation. The company proposes to charge passengers 1,200 THB each way, but the Marine Department was looking into the operational costs before announcing the actual price of the service. The journey should take around one and half hours.

The company also announced it will offer a free trial of the service for 2 or 3 days prior to the official launch. The exact dates of the free trial are yet to be announced, however this is said to be in late December. During the trial, Mr Sorasak said that the test run will be free of charge and was meant to test the seaworthiness and safety of the vessel. The company will offer two test services per day, one leaving Pattaya
at 08:30, with the return service departing Hua Hin at 15:30. However this is not confirmed as another report states that ferry will depart Hua Hin at 8:30am, and Pattaya at 15:30. Royal Passenger Liner Co. will apparently launch the service using only one boat, which can hold 150 passengers cruising at 27 knots on the 113-km journey across the Gulf of Thailand.

However, if it proves to be popular, a second boat capable of transporting 262 passengers will be used in order to cope with demand. A feasibility study on the car service and suitable routes was expected to be completed last month and an environmental impact assessment would be conducted later, Mr Sorasak added. The Catamaran ferry to be put into service on the route is a used vessel and is now being refurbished and equipped with facilities to meet the required standard. The work is expected to be completed by the end of this month after which the vessel will undergo seaworthiness test and safety test before it is to be registered. Mr Sorasak said the department would grant a ten-year operating licence to the company and would assess the service every six months for the first two years, after that assessment would be conducted once a year.

He noted that, initially, the piers in Hua Hin and Pattaya might be a little congested to accommodate over 100 passengers at a time. Both piers will be expanded to cope with increased passengers. The Siam Logistics proposal had described a ferry with a capacity to carry up to 400 passengers, 30 cars, 12 motorcycles, and shipments not exceeding 40 tons. A company spokesman indicated that the status of the proposal from Siam Logistics is unknown. Thaivisa.com/ Bangkok Post/ThaiPBS