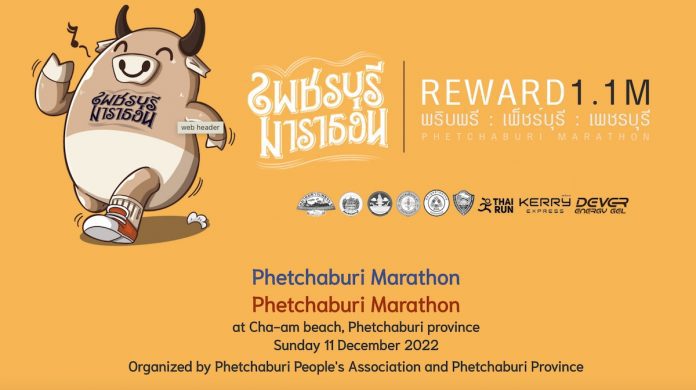 The Phetchaburi Marathon and Cha Am Food Festival will be held in December, Phetchaburi governor Mr. Nattawut Petchpromsorn has announced.

The two events will be held in conjunction with one another, with the food festival taking place between from 9 to 12 December 2022 at the Cha-am Beach Viewpoint, while the “Phetchaburi Marathon No. 1” will be held on Sunday December 11, 2022.

The races will start at Cha Am beach viewpoint with the competitors running north towards Puktien beach.

The entry fee for each race is as follows:

Registration is open to 15 October 2022 and there is a total of 300,000 baht in prize up for grabs across the various distances. The early bird discount expires on Aug 20.

Phetchaburi Governor Nattawut Petchpromsorn said both events, which are being organized by Phetchaburi Province, in collaboration with the Phetchaburi People’s Association, will bring a significant boost to local businesses, such as vendors, hotels and restaurants.

Governor Nattawut said tens of thousands of people are expected to attend both events.

The hosting of the Food Festival, will also help Phetchaburi celebrate The UNESCO Creative Cities Network award, which in November last year saw the province recognised as a city of gastronomy.