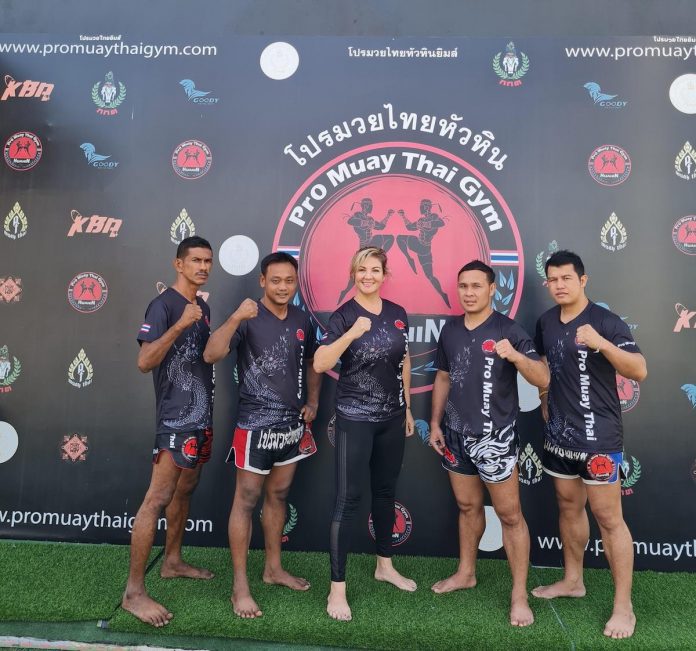 A local Muay Thai gym has become the first in Hua Hin to receive a much coveted five star certification in recognition of the professional standards and high level of training it offers to its fighters.

The Pro Muay Thai Gym, which is located on Soi 102, recently received a five star rating from the Office of Boxing Sport Board, Sports Authority of Thailand, Ministry of Tourism and Sports.

The certificate is signed by Minister of Tourism and Sports of Thailand Mr Phiphat Ratchakitprakarn. Pro Muay Thai Gym is run by South African expat Merinda and former pro fighter Kru Wanchana, who has over 15 years training experience and who is regarded by many as one of the top pro fight and Muay Thai trainers in the country.

Prior to receiving the certification, the gym underwent a rigorous assessment by a team of inspectors from Bangkok.

The assessment included interviews with the owners and trainers and also looked at the standard of training offered to fighters and students.

“They looked at all aspects of the gym. They even studied the meal plans and different nutritional programs and supplements we provide our fighters to making sure our boxing ring was of official size”, Merinda said.

“Even before we applied for the certification, we have worked hard to raise the standards of the gym and the level of training offered to our fighters and students”. The gym specializes in Muay Thai and fitness training and trains a wide range of fighters and students of various ages and abilities.

“We have 10 active permanent fighters who are training at the gym at the moment and they compete all over Thailand,” said Merinda.

The gym also caters for a large number of locals and expats who train at the facility as a way to keep fit, as well as for groups of tourists who can stay in Hua Hin and train at the gym for several months at a time.

“We have groups from Germany, Sweden, and a lot of different places who come to train with us.

“When they stay with us we like to combine training with sightseeing so that they can get to see as much of Hua Hin as possible and learn about and support the local area,” Merinda added.

Merinda said she is proud that Pro Muay Thai Gym received the certification and hopes it will have a positive impact on the Muay Thai industry in Hua Hin as a whole.

“People often don’t think of Hua Hin as a destination for Muay Thai, they are more likely to train in somewhere like Phuket.

“But there are many very good trainers and Muay Thai gyms in Hua Hin, hopefully us receiving the certification helps to raise standards of training and raise awareness of Hua Hin as a place where people can receive first class Muay Thai training,” Merinda added.

Pro Muay Thai Gym will be operating a booth at the upcoming and inaugural Amazing Muay Thai Festival, which will be held in Hua Hin next February.

The event will take place at Rajabhakti Park and the Seapine Recreation Centre and will be one the largest Muay Thai events to be held in Thailand.

One of the highlights of the event will take place on Feb 6 and will see the world’s largest wai-kru ceremony performed by 5,000 Muay Thai boxers. The performance is expected to set a new Guinness World Record.