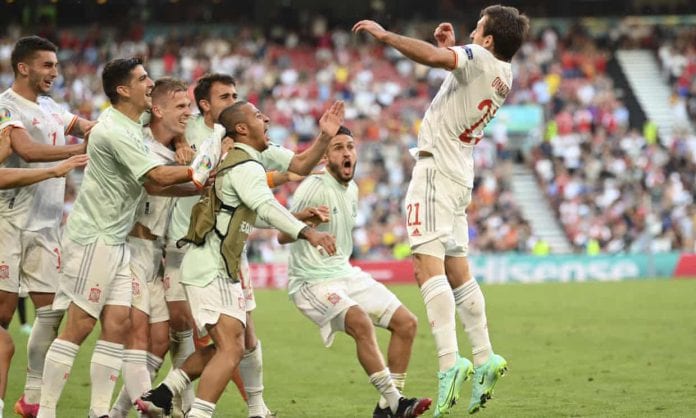 (Xinhua) — What a dramatic evening and what a thrilling game! Luis Enrique’s Spanish side held nerve after Croatia netted two goals in the closing period for a 3-3 draw in regular time, hitting another two in the extra time to secure the 5-3 victory and reach the European Championships quarterfinals on Monday.

“When you’re winning 3-1 with 10 minutes to go it’s something you need to learn from,” said Enrique.

“We don’t have that much international experience in the squad and perhaps those sorts of mistakes are inevitable.”

The 2018 World Cup runners-up fought back from 3-1 down in the 85th minute as goals from substitutes Mislav Orsic and Mario Pasalic temporarily saved the team and pulled the match into the extra time.

But the drama of the match has begun earlier, Spain’s goalkeeper Unai Simon committed a bizarre mistake early in the first half as he didn’t look at the ball when Pedri passed back from 40 yards out, only to see the ball find its way into the net to give Croatia the lead.

“Unai gave a lesson to kids everywhere,” Enrique said. “Football is made up of errors and his reaction – making great saves – was an example of why we have such confidence in him.”

It was the ninth own goal in this year’s Euro, which has equaled the tally of all the previous editions since 1960.

Pablo Sarabia leveled the score in the 38th minute, while Cesar Azpilicueta scored his first international goal to help the Spaniards move ahead before Ferran Torres made it 3-1 in the 76th minute.

But it was Morata – the man who has suffered a torrent of online abuse and even death threats after his poor performance in the group stage – that became the decisive player of the match.

The Juventus forward controlled a cross with one deft touch and then sent a rising shot past goalkeeper Dominik Livakovic for his second goal of the tournament.

Having netted three times in Euro 2016, the 28-year-old has become Spain’s joint-highest scorer in the competition along with Fernando Torres.

“I don’t think there’s any coach in the world who wouldn’t admire a player like Morata,” said Enrique, who gave Morata strong support despite the critics.

“He dominates in the air, he scores goals, he is physically powerful. He is a striker we should really value.”

Spain will next face the winners between France and Switzerland, who have drawn 3-3 in regular time and are to play the extra time.