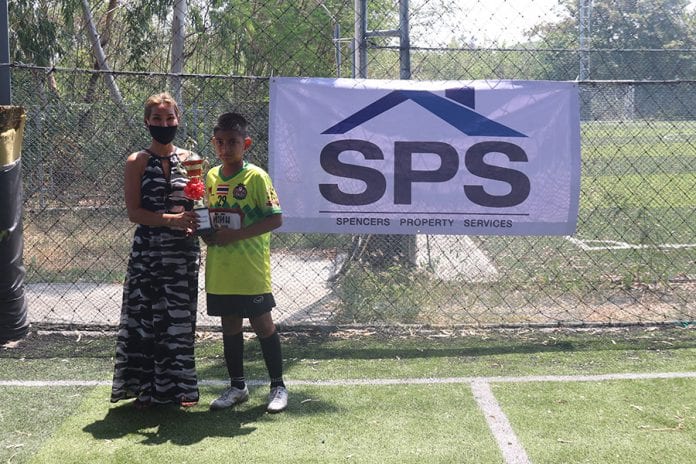 The 11th edition of the SPS Mini League took place at Midfield Soccer on Sunday morning. Five Under 12 teams were in action with SS Academy finishing on top.

The tournament featured a couple of incredible goals with a goalkeeper getting on the scoresheet for the first time in the competition’s history. Hua Hin City ran out as 2-1 winners against Black Mountain in the opening match. Hua Hin City and SS would both remain undefeated. The former picked up two wins and two draws while the latter won three matches and drew just one.

Black Mountain finished third, losing 1-0 to SS who took an early lead with a wonder goal from the half way line but rode their luck in the closing stages as the ball twice struck their post. The decisive match between SS and Hua Hin City finished goalless. Spencer Wray, of Spencer’s Property Services, said, “It was a fun morning of football with a couple of brilliant goals. It’s great to see children from different parts of Hua Hin enjoying the game and we are proud to support this tournament.”

Also in attendance was former Tottenham and England defender Gary Stevens. He was coaching the Black Mountain Under 12 team and was impressed by the football on offer,

“These children are benefiting from being able to play regular tournaments like this and you can see the standard is improving all the time. It was a really enjoyable morning and there were some incredible long range efforts.”