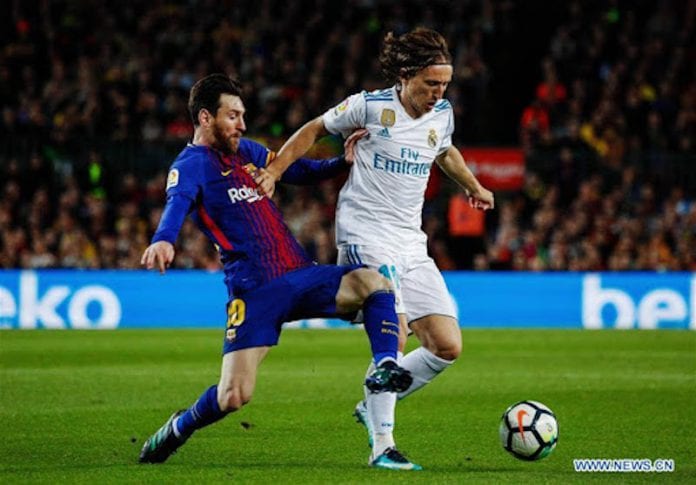 MADRID, May 24 (Xinhua) — The end of the La Liga season always brings important changes, but this summer will see more than normal as Real Madrid and FC Barcelona both lick their wounds after disappointing campaigns.

While the fans of la Liga champions, Atletico Madrid, were driving around the streets of the Spanish capital to celebrate their triumph, the post-mortem for the season was already underway in the Barca and Real Madrid offices.

Real Madrid ended the season without a title of any kind, which is virtually a capital sin at a club so used to success that anything other than claiming the league or the Champions League is viewed as a catastrophic failure.

Coach Zinedine Zidane has (perhaps wisely) taken a week’s holiday, but with the club looking to restructure for the new season, nobody should be surprised to see the change start at the top.

Zidane has been hampered in an atypical season with 51 different injuries and seven cases of coronavirus making his task much harder, but the high number of muscle injuries must have something to do with the fact his squad has several aging players, such as Luka Modric, Sergio Ramos, Toni Kroos and Karim Benzema (who was Madrid’s best player by a long way this season).

Ramos’s Madrid career looks to have come to an end, while other players, such as Isco, Marcelo and perhaps Raphael Varane, Lucas Vazquez and Alvaro Odriozola could also leave over the summer.

The club would probably be happy to see the back of Eden Hazard, who so far has to go down as the worst signing in the club’s history, but it’s hard to see who would pay the fee and the wages for a winger who has spent more time in the treatment room than on the training ground (let alone the pitch) in the last two years.

And the fact that Gareth Bale is due to return next season after his loan to Tottenham is another headache that needs to be solved in what looks like a busy summer at the Real Madrid offices.

Over in Barcelona, Ronald Koeman can at least point to winning the Copa del Rey, although for Barca that is probably viewed as a minor success. The Dutchman arrived in difficult circumstances in the summer after Barca had lost the league and been humiliated by Bayern Munich in Europe and quickly saw how several veterans left the club.

Luis Suarez (who ended the season with 21 goals for Atletico Madrid) left, along with Ivan Rakitic, Arthur, Nelson Semedo and Arturo Vidal, significantly lowering the wage bill, but the squad was also significantly weaker than the one that had just failed and Leo Messi’s transfer request only served to heighten the feeling of inherited chaos last summer.

To make matters worse teenage star Ansu Fati missed nearly all of the season with a knee injury, while Gerard Pique, Sergi Roberto and Philippe Coutinho all suffered long-term injuries (although Coutinho hardly shone before his knee operation).

With Samuel Umtiti also among the walking wounded, Koeman showed faith in youngsters and former B-team defenders, Ronald Araujo and Oscar Mingueza provided some of the good news for Barca this season. 18-year-old Pedri was a revelation in midfield, while Koeman also started to bring the best out of Frenkie de Jong and to a lesser extent, Antoine Griezmann and Ousmane Dembele, but the club still relied too much on Messi for inspiration and goals.

The election of Joan Laporta as club president in February also heralded a new era at the club, with the feeling that Koeman, who was appointed by Laporta’s discredited predecessor, Josep Maria Bartomeu, belongs to the past.

Koeman could have assured his job with the title, but after a much-improved start to 2021, Barca slipped away in the last month of the season and he will probably also go as part of another summer clear out, although Barca’s financial situation means any renovation will have to be ‘low-cost,’ and perhaps Koeman’s work with the youngsters will be his legacy.