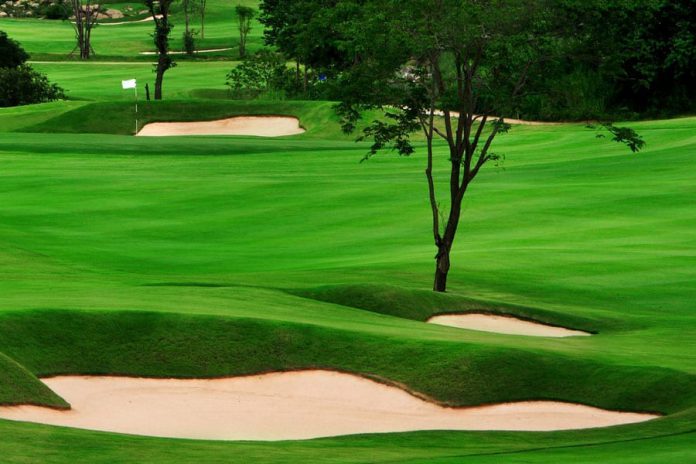 Our suggestions for fun games to play with friends during your next round.

1. BISQUE
PERFECT FOR: Golfers who routinely struggle with a specific hole
Description: In a Stableford game, instead of the scorecard mandating where handicap strokes are given, a player can use his or her handicap strokes on any hole until they run out. A maximum of two strokes can be used on any one hole. The handicap stroke (or two) may need to be declared before the tee shot on that hole or after completion, up to you! The player with the low-net score wins. This game is great because, if there are holes on your course where you routinely struggle, you can use your strokes on those holes to avoid a big score.

2. 5-3-1
PERFECT FOR: Threesomes
Description: It’s tough to find good games for three players but this one might be the best. There are a total of nine points available on each hole. The player with the low score on a hole gets five points. The player with the second-lowest score gets three. And the worst score on a hole gets one. If there are ties, you simply divide the points by the number of players tied. For example, if two players tie for the best score on a hole, they split the first- and secondplace points, 5 + 3/2 = 4 apiece or if two tie for second, 3 + 1/2 = 2 apiece. If all three players have an equal score – 3 points each.

3. CLOSEOUT
PERFECT FOR: Golfers who like to keep it simple and fair
Description: The problem with the popular game called a “nassau” is that winning the 18-hole match is often undervalued. With a closeout, the 18-hole match is one competition, a second match is for the 1st nine and a 3rd match is for the 2nd nine. The real beauty of this game is that it’s simple to keep track of the match.

4. QUOTA
PERFECT FOR: A group of any size with legitimate Handicap Indexes
Description: Each player takes his or her course handicap, then subtracts that number from 36 and that becomes the point quota they have to make during a round. Typical scoring for a mid-handicap group would be 1 point for a bogey, 2 points for a par, 4 for a birdie and 8 for an eagle (points can be adjusted in any way). The player with the most points above their quota wins. I’ve always liked this game because pars and birdies are worth so much more to average golfers than just being one shot better than a bogey.

5. STRIKE THREE
PERFECT FOR: Mid-to-high handicap groups
DESCRIPTION: At the end of a round, each player gets to throw out his or her score on three holes and then the best 15-hole score wins. This is a great game for mid-to-high handicappers because it keeps everyone involved much deeper into the round, especially if a player or two had a couple of “blow-up” holes along the way.

6. SNAKE
PERFECT FOR: Learning how to putt better in the clutch
Description: You know those threefooters that your group always swats away as “gimmes?” You can’t do that with this game. You have to putt them out and any time a player three-putts or worse (the ball has to be on the green for the first putt), that person wins the ‘snake’. The last person to three-putt and the holder of the ‘snake’ has a predetermined penalty. Another version makes the person with the most threeputts penalised. It’s recommended to play this game when the course isn’t crowded because it can slow things down. However, it’s a great game to learn how to make short putts and not take other putts for granted.

7. BOUNCE BACK
PERFECT FOR: Shaking off bad holes
Description: This one is my favorite because it rewards players who don’t give up. Essentially, any time a player follows up a double bogey or worse with a par or better on the next hole, they win a point determined in advance by your group. Any time a player makes back-to-back double bogeys or worse, they lose a point.

8. LET IT RIDE
PERFECT FOR: Hardcore competitors
Description: Players earn points for making a bogey or better on a hole. A typical point distribution would be 5 for a bogey, 15 for a par, 30 for a birdie and 60 for an eagle (better groups can start with par as the first point-eligible score). After earning points on a hole, the player has the option of banking the amount or “letting it ride,” meaning the point total can still grow on subsequent holes.
The point totals double for every hole that they aren’t banked. So a bogey on a second consecutive hole would now be worth 10 and a par would be worth 30 and so on.

However, if a player elects to let his or her points ride and a double bogey or worse is made, the player’s total points not banked goes back to zero. Banked points can’t be taken away and are credited at the end of the round. The players with the highest point totals are paid a predetermined amount for every point they have earned in relation to the other players. This is a great game for golfers who are streaky and also for golfers who love to gamble. Think about it: If you make back-to-back birdies without banking, you’ll have earned the equivalent of making 18 bogeys earned at 5 points each.

9. PICK-UP STICKS (BAG RAID)
PERFECT FOR: Twosomes or foursomes looking to break up the monotony of their usual games.
Description: This is a standard matchplay competition with a little twist. When a golfer or team wins a hole, they “remove” a club from the opponent or opponents’ bags. That means the other team can’t use that club for the rest of the round. This continues until the match is decided. A variation of this game allows a team to reinstall clubs to their set if someone on the team makes net birdie or better to win a hole. Things can get really creative and shotmaking becomes a bigger part of the round when certain clubs are eliminated. The putter is usually exempt from this process.

10. TROUBLE
PERFECT FOR: Improving shot selection and course strategy
Description: Instead of rewarding players for good play, golfers are given points for their mistakes. A common point allocation: Hitting a ball in a bunker (1); Hitting into the water (2). Hitting out-of-bounds (3). Threeputting (1). Four-putting (4). Duffing a tee shot (1). Points can also be subtracted for stellar play such as making birdies, holing long putts or stiffing shots from off the green, etc. This is a great game to learn course management and how to stop taking unnecessary risks.