World No.5 Elina Svitolina leads the field in the second edition  of the GSB Thailand Open presented by EA, to be held in Hua Hin between February 10th to 16th.

Svitolina, whose career highlights include victory at the 2018 WTA Finals in Singapore and semi-finals at both Wimbledon and the US Open last year, will try to become the second Ukrainian to hold a trophy in Hua Hin after teenage rising star Dayana Yastremska won the inaugural edition last year.

The competition will also boast a slew of Chinese players.  World No 41 Zheng Saisai is back after being forced to withdraw from the 2019 edition due to health problem. She’ll be joined by No 51 Wang Yafan, 71 Zhu Lin, 104 Peng Shuai and 134 Wang Xiyu. Other top 100 players flying in will include World No 35 Hsieh Su-wei of Taiwan, 43 Magda Linette from Poland, 82 Danka Kovinic from Montenegro, 83 Tatjana Maria from Germany and No 95 Paula Badosa from Spain.

“I am thrilled that the Women’s Tennis Association (WTA) has put its faith in Proud Group Company Limited and True Arena Hua Hin to organise the tournament again this year,” said Suwat Liptapanlop, chairman of the tournament committee, during a January press conference.

This year’s line-up will please the local fans eager to see the world’s top players in action.” Thailand will be represented by former World No.19 Tamarine Tanasugarn, a stalwart of the sport, who will compete in the doubles competition. The 42-year-old will be joined by 25-year-old World No.816 Patcharin Cheapchandej, who has received a main draw wildcard, and 17-year-old former junior World No.14 Mananchaya Sawangkaew, who has received a wildcard for the qualifying draw.

Both Cheapchandej and Sawangkaew received the wildcards for the competition from the Road To Thailand Open 2020 tournament. New for 2020 in terms of competition is the use of Electronic Line Calling (ELC) for the replay of the falling ball that may be too fast for the human eye, as well as the 25-second shot-clock rule.

Breast Cancer Foundation Donations
Just watching a tennis match they will be helping to fight breast cancer as the WTA International event will donate all ticketing revenues to the Queen Sirikit Centre for Breast Cancer Foundation to help patients with terminal cancer.  The WTA Thailand Open will donate a minimum of THB 1 million, approximately $33,000. In addition, APG will also donate $10,000, the WTA $5,000 and WTA Charities another $5,000. 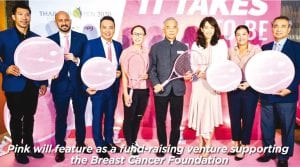 The tournament and the WTA will also create an charity program in the lead up to the event with players helping to expand awareness of the issues surrounding the disease. For more information, call 032 -909-633 or see more details of the competition at https://www.wtatennis.com/ tournament/1096/hua-hin Event tickets Available via the competition website at https://www.vananavahuahin.com/wta-thailandopen-2020.

Tickets, priced from 800-1,800 THB, can be purchased at www.thaiticketmajor.com, and www. vananavahuahin.com 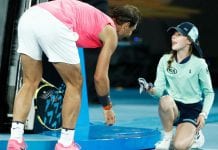 Rafael Nadal hits ball girl on the head with shot, apologizes with kiss