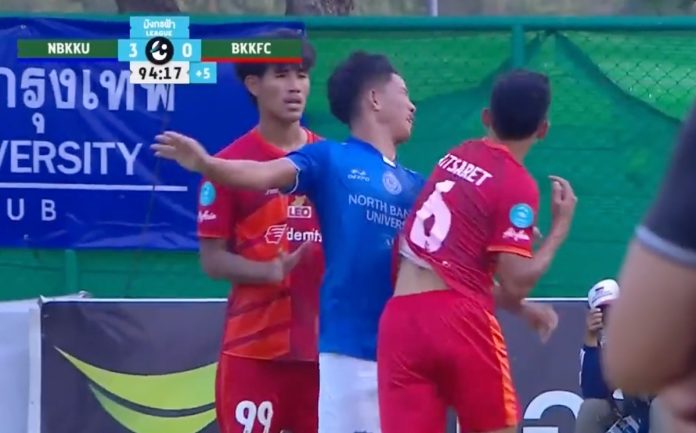 A Thai footballer has been sacked after carrying out a shocking attack on a rival player.

Aitsaret Noichaiboon, who plays for Bangkok FC in Thailand’s third tier launched a brutal Muay Thai style elbow on Supasan Ruangsuphanimit from Bangkok University FC during a game on Sunday.

Noichaiboon, was sacked a short time after being shown a red card over the incident.

During the last minute of the match, with Bangkok FC trailing 3-0, Ruangsuphanimit could be seen kicking out at Noichaiboon as the players challenged for the ball.

Ruangsuphanimit was taken to hospital where he needed 24 stitches for a wound on his face.

A statement on the Bangkok FC Facebook page read: Bangkok FC would like to [take a] stand and not support the action.”

“The club has cancelled the contract of the player.

“The club would like to express our condolences for the incident, and will do everything possible to stop this happening again.”