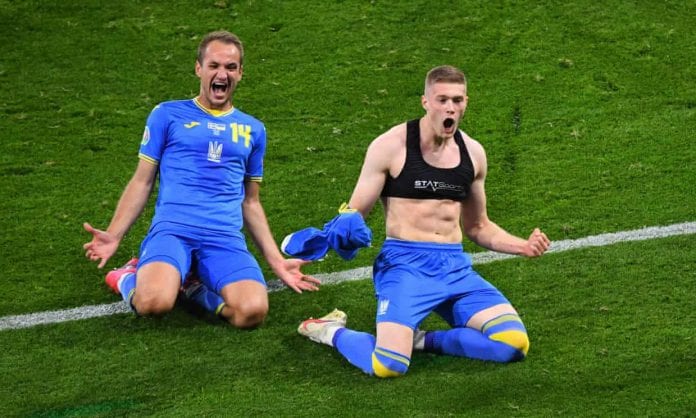 (Xinhua) — Ukraine advanced into the European Championship quarterfinals for a second time after overpowering ten-men Sweden by courtesy on Artem Dovbyk’s last-gasp extra time winner at Hampden Park in Glasgow on Tuesday.

The Ukrainians started cautiously into the match and let Sweden to pass the ball around.

Despite dominating possession Sweden wasn’t able to pose a lot of threat to Ukraine’s rock-solid defence hence only Alexander Isak came close with a long-range effort in the 20th minute.

Andriy Shevchenko’s side showed no mercy and clinically opened the scoring seven minutes later when Andrey Yarmolenko’s shot with the outside of the boot allowed Oleksandr Zinchenko to break the deadlock against the flow of the game.

Sweden continued offensively minded and got rewarded with the equalizer just before the break as Emil Forsberg had enough time and space to drill the ball from 23 meters past Bushcan into the bottom right corner.

After the restart, both sides came out highly motivated and created chances at both ends of the pitch as Serhiy Sydorchuk and Forsberg rattled the right post in quick succession.

Ukraine focussed on counterattacks while Sweden remained a constant menace with Forsberg, who hit the crossbar from 16 meters in the 69th minute.

Sweden had even the golden chance to seal the deal within 90 minutes but for all that Dejan Kulusevski missed the target from inside the box with only Bushcan to beat.

In the extra time, Sweden had to swallow a heavy setback as Marcus Danielson was sent off for a rude foul play in the 99th minute.

Outnumbered Swedes defended well and hoped to rescue themselves into the penalty shootout, but their resilience got broken in the injury time of the extra time as Zinchenko’s pinpoint cross into the box found Dovbyk, who nodded home the 2-1 decider from very close range.

“Both teams played very well. It was an interesting match. Neither side wanted to lose so we got this drama at the end. With this performance and commitment, our team has deserved the love of the whole country,” said Ukraine head coach Andriy Shevchenko.

With the result, Ukraine will clash with England in the quarterfinal in Rome on Saturday.