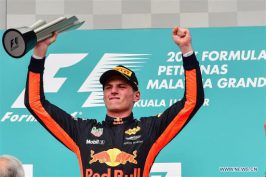 Max Verstappen took the lead in the Formula One World Championship after cruising to a convincing win in Sunday’s Monaco Grand Prix, with original polesitter Charles Leclerc unable to take the start and title rival Lewis Hamilton finishing a below-par seventh.

Leclerc had taken pole position for his home Grand Prix on Saturday in somewhat controversial circumstances, after crashing his Ferrari at the swimming pool section on his final qualifying run to bring out the yellow flags and prevent others from beating his time.

With Leclerc having clouted the barriers and damaged his car, there were suggestions that the Monegasque may have required a gearbox change which would incur a grid penalty, though Ferrari denied that this would be the case.

But on his way to the grid, Leclerc radioed his team to complain of gearbox issues, and after returning to the pits for further checks, it emerged that his driveshaft was too badly damaged for him to take the start.

Leclerc’s misfortune continues his run of bad luck at his home circuit, with the Monegasque never having finished a race at Monaco.

Verstappen’s title rival Hamilton struggled all weekend, having lined up only seventh on the grid after a scrappy qualifying session. The Mercedes driver frequently took to team radio to bemoan his lowly status in Sunday’s race, and a bonus point for fastest lap will be scant consolation for the Briton losing his championship lead.

A bad day for Mercedes was compounded when Hamilton’s teammate Valtteri Bottas had to retire from the race while lying second, after his mechanics were unable to remove his right-front wheel during his pitstop.

No such problems befell Verstappen, however, who headed off Bottas at the start and was never threatened as he cruised to his second win of the 2021 season.

“It’s so special around here to win,” said the Dutchman afterwards. “It’s my first time on the podium here. Amazing race. You never know what’s going to happen but we were pretty much in control.”

“You always want to win this Grand Prix, so of course, I’m very proud, but I’m also thinking ahead – it is a very long season.”

Behind Verstappen, Carlos Sainz salvaged some glory for Ferrari by finishing second to take his first podium finish for the Scuderia, while Lando Norris continued his impressive recent form to take third place for the second time this season.

Strong pace in the middle of the race saw Verstappen’s teammate Sergio Perez finish fourth after starting ninth on the grid, with Sebastian Vettel taking a fine fifth place to score his first points for Aston Martin.

Pierre Gasly took a solid sixth in his AlphaTauri, holding off the challenge of an unusually out-of-sorts Hamilton, who was unable to make headway on a circuit that is notoriously difficult to overtake on.

Lance Stroll finished eighth to make it a double points finish for Aston Martin, with Alpine’s Esteban Ocon taking ninth and Antonio Giovinazzi rounding out the top ten in his Alfa Romeo.

Apart from the non-starting Leclerc, Bottas was the only driver not to see the chequered flag.

Following his win, Verstappen now leads the drivers’ championship for the first time in his career with 105 points, ahead of Hamilton who slips to second on 101 points. Norris moves ahead of Bottas to sit third with 56.

In the constructors’ standings, Red Bull now lead with 150 points, but Mercedes are just two points behind on 148, and McLaren stay third with 80 points.

The next round of the 2021 F1 season is the Azerbaijan Grand Prix on June 6.