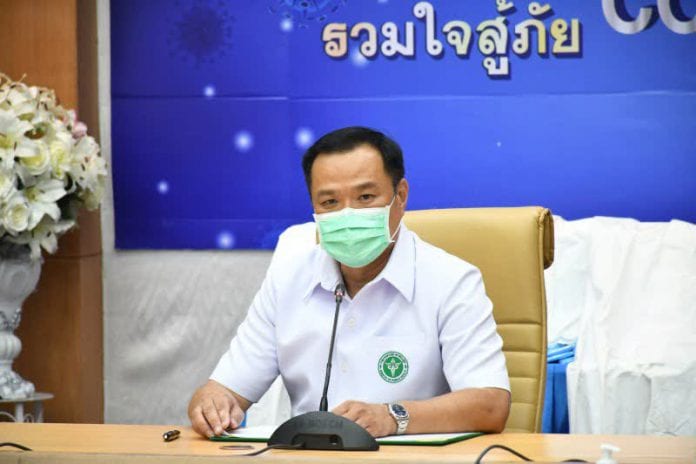 BANGKOK (NNT) – The Minister of Public Health has reassured the community that more AstraZeneca vaccine will be delivered in June, albeit without a clear delivery date, as some hospitals have started rescheduling second dose appointments for their patients.

Deputy Prime Minister and Minister of Public Health Anutin Charnvirakul, elaborated on the delivery of AstraZeneca vaccine, saying today that the government and AstraZeneca have agreed to start delivering the vaccine to Thailand in June, however not necessarily from 1st June.

The Thai government is expecting to receive AstraZeneca vaccine locally produced by Siam Bioscience for its mass vaccination campaign starting on 7th June. Mr Anutin said AstraZeneca is obliged to source the vaccine from other manufacturers to fulfill the order of the Thai government, should the local plant fail to make the expected delivery.

Should there actually be a shortage of AstraZeneca vaccine, the Health Minister said Thailand still has on hand Sinovac vaccine, that has supplied the vaccination program to date.

The Minister of Public Health earlier made a statement regarding the extra doses drawn from a vail of AstraZeneca vaccine, which could increase the dose yield per vail from 10 to 12 using low dead space syringes. Mr Anutin now says his comment has not been become policy, as the most important thing is to ensure a person receives exactly 0.5 cc of the vaccine per dose, as indicated by the manufacturer.

He said the mass vaccination campaign will start on 7th June as planned for people registered on Moh Prompt as well as other platforms. The vaccine will not be exclusively AstraZeneca’s, but any brand available will be given as considered appropriate.

Thailand’s vaccine rollout is currently almost exclusively relying on Sinovac vaccine, ahead of the delivery of AstraZeneca vaccine in June. The Thai government is now in talks with Pfizer to procure their mRNA vaccine, however there is yet to be clear detail on delivery.

The Minister of Public Health said the government’s talks with Pfizer are now on track, with the company now seeking to file for regulatory approval by the Thai Food and Drugs Administration, which will be the first step in the procurement.

On scepticism surrounding Sinovac vaccine, the Minister of Public Health said the Chinese-made vaccine has been tested for efficacy by several medical institutions, while a survey after some three million doses were given in Thailand, shows the vaccine triggers a good immune response.

Mr Anutin said Sinovac has already submitted its data for the WHO Emergency Use Listing Procedure (EUL), where reviews are being conducted, while stressing the Thai government will not procure substandard vaccines for its people.