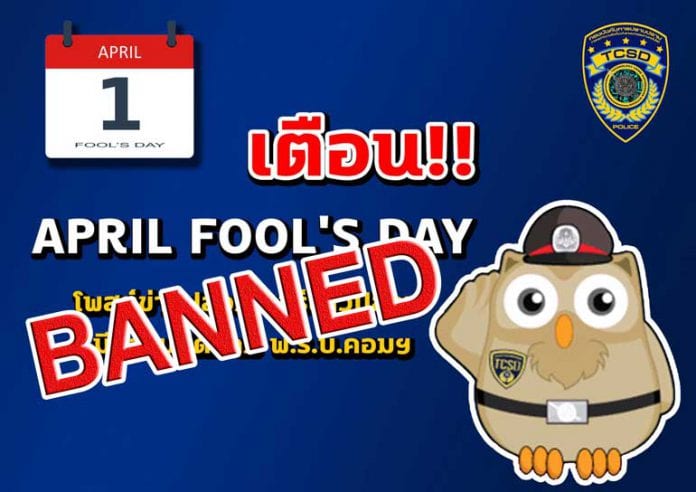 Thailand’s paranoia over so-called ‘fake news’ appears to have scuppered the plans of anyone wishing to partake in some lighthearted fun on April 1st.

On Wednesday, killjoys at the Technology Crime Suppression Division (TCSD) advised people in Thailand against sharing April Fool’s jokes online and said anyone that does so could be breaking the law, Thaivisa reported

Posting an April Fool’s joke could be considered as deliberately sharing fake news, the TCSD warned, and may be in breach of Thailand’s strict Computer Crimes Act.

While April Fool’s day is celebrated in many countries around the world, it is not considered part of Thai culture, Channel 7 reported.

Because posting an April Fool’s online could be considered as deliberately and knowingly posting ‘fake news’, which is against the law in Thailand, it means that for all intents and purposes April 1st pranks are off limits.

The TCSD also reminded netizens that anyone in breach of the Computer Crime Act regarding the deliberate sharing of so-called ‘fake news’ faces up to five years in jail and/or a fine of up to 100,000 baht.