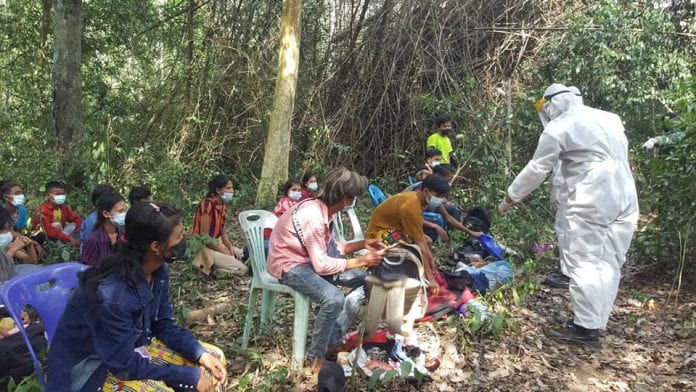 The arrest of a group of illegal immigrants who sneaked across the border in Prachuap Khiri Khan has revealed the amount of money paid to the traffickers who smuggle them.

On Wednesday (May 5) thirty migrants from Myanmar were rounded up in Prachuap Khiri Khan’s Ao Noi Subdistrict as they attempted to enter the country illegally.

The arrest of the group, who were aged between 14 and 30 years old, is part of a wider operation led by immigration and the security forces to crack down on people slipping into the country across the border with Myanmar.

The group were intercepted by soldiers on patrol in an area approximately 1km from the Tanaosri mountain range along the Thai-Myanmar border.

The suspects, 13 of whom were women, failed to produce passports or other travel documents and were charged with illegal entry.

Officials said one man confessed to being the ringleader of the group.

He lives in Ban Mudon in Myanmar, opposite the Dan Singkhon border crossing and frequently brings people over the border from Myanmar.

The ringleader told officers that a Thai broker pays him 4,000 baht per head and that  he would have earned about 120,000 baht from this particular trip across the border.

He went to say that the Thai broker earns even more money once he has delivered the workers to employers in Samut Sakhon or Bangkok where they typically go to work on fishing boats or in factories.

He said the Thai broker is paid 15,000 baht per head and that he can earn in the region of half a million baht after just one trip.

The ringleader said that he has hundreds of people on a waiting list wanting to make the journey into Thailand.

And to give an insight into the grim reality of life as an illegal migrant worker in Thailand, the ringleader said that the employers then deduct the delivery fee from the salaries of the workers until the debt is paid off.

Security  officials said they took records of the group and fingerprinted them before taking them to the Singkhon checkpoint where they returned to Myanmar.

In Prachuap Khiri Khan, if illegal immigrants from Myanmar are caught within a 3-kilometer radius of the border, they are sent back across the border rather than facing prosecution in Thailand in order to help prevent the spread of COVID-19.

In December last year, illegal migrant workers and those who trafficked them in to Thailand were blamed  for what was then the biggest surge in coronavirus cases since the first infection was detected in Thailand in January 2020.

That outbreak, now known as the second wave of infections, resulted in Thailand’s Prime Minister Prayuth Chan-o-cha vowing to crack down on syndicates that smuggled migrants into the country in defiance of Thailand’s strict rules on entry into the country during the pandemic.