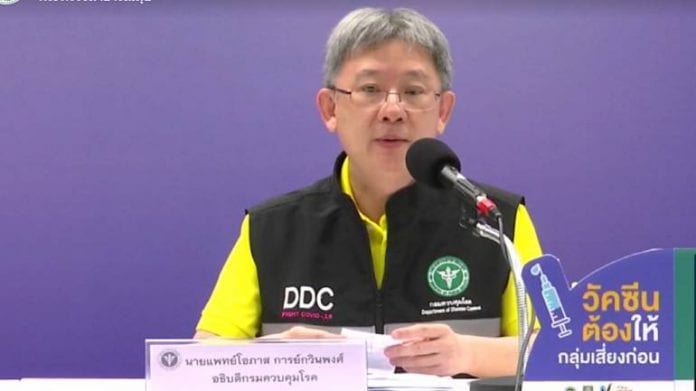 Bangkok, and its four neighbouring provinces of Pathum Thani, Nonthaburi, Samut Prakan and Nakhon Pathom, are likely to be declared COVID-19 Red zones, under which stricter measures will be imposed, such as all eateries closing at 9pm and being banned from consumption or sale of alcohol.

These measures were proposed by the Emergency Operations Centre and a committee of disease control experts at a meeting today, called to assess the pandemic situation in Bangkok and its peripherals, following the emergence of new clusters linked to entertainment venues Thonglor and Ekamai areas, and in Pathum Thani.

The measure will be proposed to the CCSA subcommittee for consideration on Wednesday.

Dr. Opas Karnkavinpong, director-general of the Disease Control Department, said that the two new clusters, one linked to a prison in Narathiwat province and the other to entertainment venues in Bangkok and its suburbs, are a matter of very serious concern, necessitating the need for stringent measures to control the spread of the disease ahead of the Songkran festival, when a lot of people will travel all over the country.

Besides the early closure of eateries and the ban on alcohol in the Red Zones, entertainment venues, such as pubs and bars, will only be allowed to operate up to 9pm.

Department stores and malls will operate as usual, but under a “new normal” format, which requires all shoppers to wear face masks, observe social distancing, go through thermal scanning and to use tracing applications.

In Orange zones, all eateries are allowed to open until 11pm and alcohol can be served. Pubs and bars can stay open to 11pm, with live music but without dancing.

In Yellow zones, eateries and other entertainment venues can stay open until midnight. Alcohol can be served in the premises, with live music but no dancing.

Dr. Opas stressed the most important element is cooperation from members of the public in following the safety guidelines.