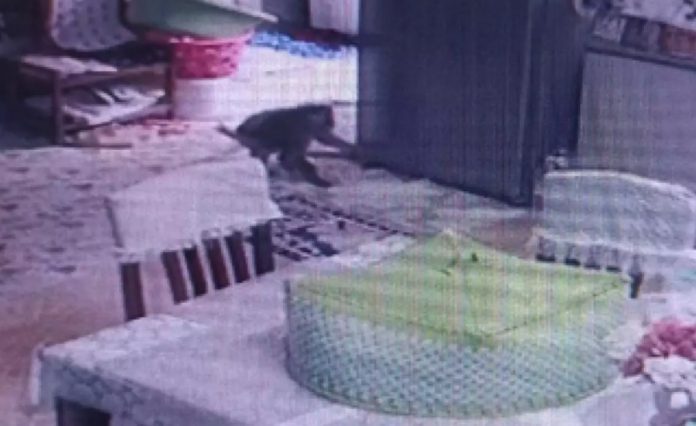 A cheeky monkey has been caught on CCTV stealing food from the fridge at a family’s home in Lopburi.

In the video, the monkey can be seen entering the kitchen and opening the fridge door before helping itself to the food inside.

The monkey then flees in a panic after hearing someone in the house approach the kitchen.

Homeowner Phimontip Rungphant, 59, told PPTV she could not believe the monkey had managed to steal food from the fridge.

She said inside the fridge were broken egg shells and signs that the monkey had even managed to open some jars and food containers.

She said she had to throw away many of the items that were in the fridge.

Ms Phimontip added that she has spoken to the local authorities about how to discourage the monkey from returning.

She said she will look at ways to prevent the monkey from entering her property and that cages would be set up to trap the monkey should it return again.

Lopburi is of course well known for its huge population of macaques that roam the city.

It is estimated that there are as many as 4,000 macaques that live around the city centre.

Last year, the fall in tourists arriving in the city due to COVID-19 resulted in fewer people offering the macaques food, forcing the primates to fight over whatever scraps they could get.