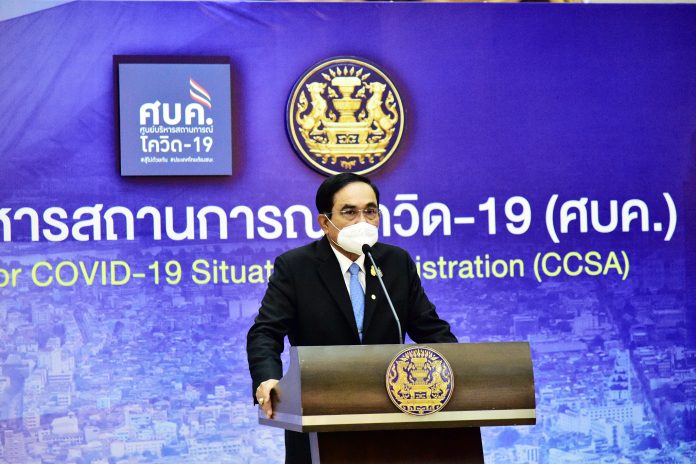 Thailand announced on Thursday a further easing of COVID-19 restrictions nationwide starting from Oct. 16, as the country’s immunization rates have been increasing recently.

Moreover, the number of “dark red” provinces which are under maximum control will be cut down from 29 to 23 provinces.

Both Prachuap Khiri Khan and Phetchaburi have now been downgraded to Maximum Control ‘red’ zones.

The new measures are effective from October 16 and are likely to be in place until at least the end of October.

The CCSA said that restrictions could be eased in part due to the increased immunization rates throughout the country.

In addition, it was also announced that Thailand would boost its the vaccination regimen with additional Pfizer vaccines, which will be used in combination with Sinovac and AstraZeneca vaccines. Meanwhile, the Prime Minister and Defense Minister General Prayut Chan-o-cha has spoken about the continuing improvement of the COVID-19 situation in the country.

The improvement in the situation helped with the recent decision made by the British government, which saw the UK remove Thailand from its so-called ‘red list’.

This means that people who have received the full dose of vaccines approved by the UK do not need to be tested for COVID-19 before travel or quarantined once they arrive in the UK.

The Prime Minister also reaffirmed that Thailand was ready to reopen the country and welcome quarantine-free tourists from 1 November 2021 onwards.

By December 1, 2021, alcohol consumption in restaurants will be considered in order to stimulate the tourism sector in the run up to the New Year celebrations.

The Prime Minister has also advised relevant agencies to take adequate measures to welcome international tourists and to be prepared to deal with any new COVID-19 strains that may emerge, including expediting vaccinations, especially to target groups or those deemed most at risk.

The Prime Minister reiterated  his commitment to ensuring that everyone living in Thailand, including Thais, children, students, and visitors, has the opportunity to be fully vaccinated against COVID-19.

Finally, CCSA Spokesperson Dr. Taweesilp Visanuyothin said it was agreed in principle the number of provinces to reopen to foreign visitors will increase from 10 to 15.

From 1 to 31 December, 16 more provinces, such as Chiang Rai, Mae Hong Son, Lamphun, and Phrae, will reopen. From 1 January 2022, more relaxation measures will be introduced when the situation continues to improve and more provinces will be reopened to foreign visitors.