BANGKOK – An evacuation preparation has been set for Thai workers in Iraq and Iran if the conflict between Iran and the US escalates, following the U.S. drone strike that led to the killing of Haj Qassem Soleimanni, a top Iranian general last.

PM Prayut Chan-o-cha said on Monday that “evacuation is most likely the immediate plan if the situation worsens in the Middle East and it can proceed without my direct order”.

“All Thai citizens there must be safe and protected, that is my priority” he told reporters.

There are now 257 Thai workers in Iran and 25 others in Iraq according to the Ministry of Labour. Most of them are working as construction workers, labourers, welders and masseuse. Others are working in restaurants and fishing industries.

Thai diplomats in Iraq, Iran, Saudi Arabia and the UAE were told to prioritize the safety of Thai nationals working overseas and to assist them if help as needed.

Meanwhile in Bangkok, officials were told by the Prime Minister to beef up security at the Iranian and US embassies in the city.  The Metropolitan Police Division 5 has been ordered to keep a close watch near and around these embassies, which are located in the Lumpini and Thong Lor areas.

Gen. Prayut also expressed concern over economic slap back due to the ongoing conflict in the Middle East, especially on oil prices which climbed nearly 4% on Friday and are likely to rise further if situation does not ease, says Pimchanok Vonkorpon, chief of Trade Policy and Strategy Office. 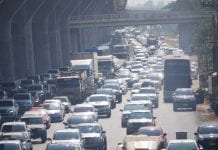 Bangkok bids for highest road deaths during the holidays