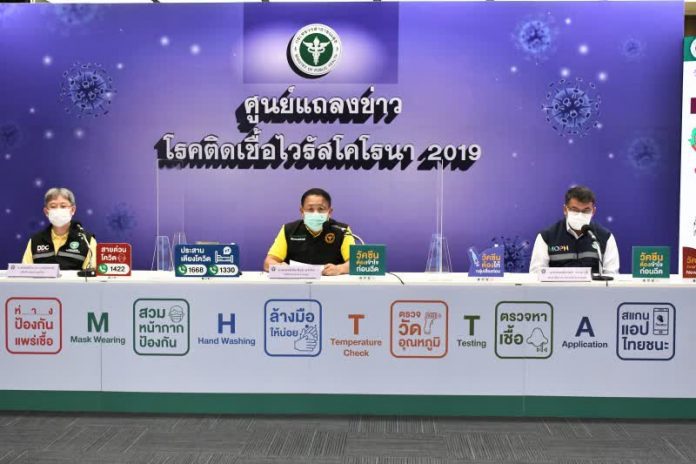 BANGKOK (NNT) – The Department of Disease Control (DDC) says that further use of elevated prevention measures against COVID-19 is expected to bring down daily infection numbers, but reiterated that the most important factor remains public cooperation.

In a press announcement by the Ministry of Public Health, Director-General of the DDC Dr. Opas Karnkawinpong said that based on statistical assessments of actual patient and fatality numbers following the elevation of preventative measures, an extension of the regulations would bring down daily infection rates as long as they were maintained in tandem with proactive searches for infections and vaccination of risk groups such as senior citizens, the chronically ill and pregnant women, an effort currently being taken by the Ministry of Public Health.

He added that with strong cooperation from the public, the daily contraction rate could drop by 20 percent in one month’s time to about 30,000 people a day, from the present number in excess of 40,000 people.

The peak of infections is expected to occur in October but should be lessened by up to 25 percent if current measures are maintained and good cooperation is provided. With no regulations, the fatality rate could rise to over 500 people a day.

Permanent Secretary for Public Health Dr. Kiattiphum Wongrajit, reported today that with 100,000 hospital beds originally available nationwide, another 175,000 have now been set up for COVID-19 patients in particular. In Bangkok, 90 percent of provided beds have already been taken while 80 percent of beds in the provinces are occupied. Due to the ministry being unable at this time to add more beds, it has decided to adapt its approach and has introduced home and community isolation so that only severe patients are admitted to hospital. CCRT teams have also been dispatched to seek out infections.

Deputy Permanent Secretary for Public Health Dr. Yongyos Thammawuthi indicated that between August 4 and 10, the office would send officers into Bangkok to carry out mass Antigen Test Kit tests, and to administer vaccines to healthy people at home. Meanwhile, all public health systems are to be brought together to ensure the sick may readily access care and medicine.