Chonburi Gov. Pakarathorn Thienchai kicked off the Nov. 29-30 extravaganza with Mayor Sonthaya Kunplome, followed by a parade with marching bands and carnival acts.

Tens of thousands thronged to the shoreline with those arriving early enough able to put down beach mats. Cameras were everywhere, snapping shots and videos that soon flooded social media.

Even more people filled rooftops and sky bars to get birds-eye views of the pyrotechnics with hotels offering special deals on food and rooms.

The night also was filled with music and entertainment on Beach Road. Thai rock bands The Musketeers and Sweet Mullet on Friday night, and Yes’sir Days and 25 Hours put on shows between and after the fireworks from Thailand, Argentina, Canada, Germany, the Philippines, and United Arab Emirates. 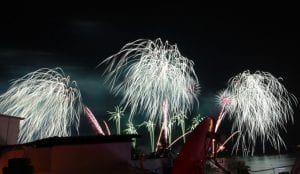