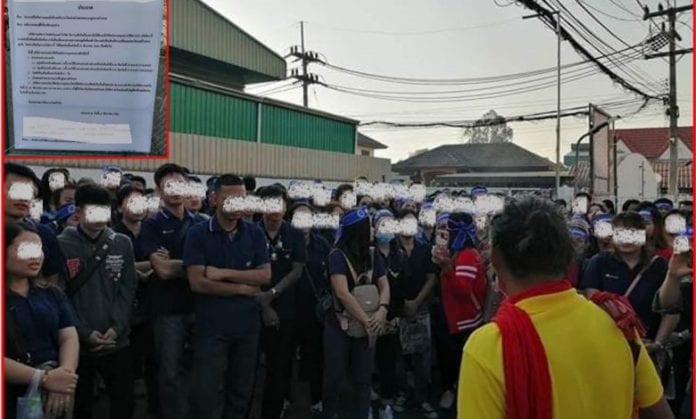 Hundreds of workers arrived for work on Monday morning (December 23) only to discover to their dismay that the factory, which makes rubber parts for automobiles, in Samut Sakhon’s Krathum Baen District has closed with immediate effect.

The story along with photos of the announcement of closure and the shocked workers standing outside the factory was published on the “Sangkhom Rong-ngan” Facebook community page (www.facebook.com/185845325505646/).

The announcement, which was put up on the gates to the factory, reads: “The company deeply regrets to inform all workers that it must close with effect from December 23 due to the bad economy which necessitates restructuring of the business”.

The company has promised to pay compensation to all workers in accordance with the law including compensation for the lack of advance warming equivalent to 24 days or 39 days of wages, compensation for annual leave not taken and compensation for termination of work.  The workers could collect the money in person from December 23-25 or the pay would be wired to their accounts on December 26, the company said in its announcement, which included a footnote that a copy of the document had already been submitted to the Samut Sakhon Labor Protection and Welfare Office.

Last month, the Industry Ministry, responding to recent news of factory closures and consequent terminations of employment , reported that from January 1 to November 12, there were 1,391 requests to close factories and 2,889 requests to open new ones.

The number of new businesses still outnumbered the shuttered ones by 107 per cent, the ministry’s deputy spokesman, Krichanont Iyapunya, said. Although 35,533 workers had been laid-off by factories, 84,033 had been hired to staff the new establishments, he added

The deputy spokesman went on to say that investment in new businesses and for expansion of existing factories in 2019 totalled Bt431.216 billion – which was 36.6 per cent more than last year. “Society should not panic over the one-sided news reports as the overall picture show that factories are not in recession,” he said at the time, though this will be of small consolation who found themselves laid off this morning.