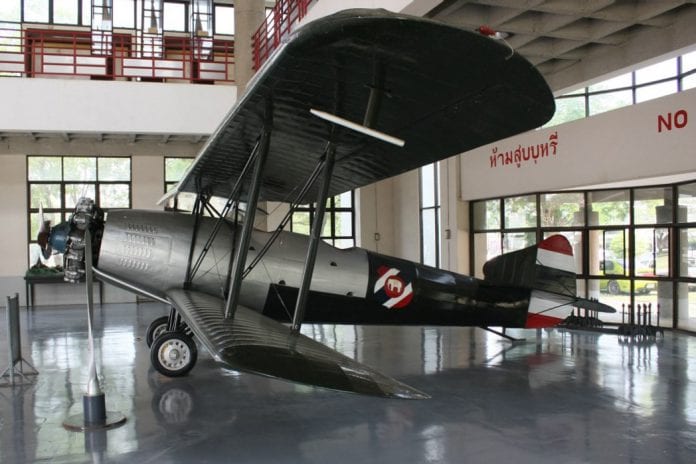 The first flying demonstration for the public took place on January 13, 1914, with King Vajiravudh in attendance. In his diary for that day, the King echoed the sentiments of most of the large crowd when he wrote, “I am delighted to see that we Thais are not bested by the Westerner, truly we can do whatever they can do.” The new flying unit was to be based at Don Muang, some 23 kilometres north of Bangkok, a site personally selected by Prince Chakrabongse because the land there was relatively high and thus less subject to flooding in the monsoon season.

Construction began in early 1915 on a proper airfield, with hangars and other facilities that, starting March 7, 1915, housed the upgraded Army Air Corps. The first plane, a Nieuport, landed there on March 8.

In those days, the airfield wasn’t connected to Bangkok by road, the only access being by railway on the northern line which passed the site. Today, Don Muang is the oldest airport in the world still being used in its original location.

On March 27, 1915, now celebrated as Royal Thai Air Force Day, the Ministry of War promoted the new section to become the Aviation Division of the Army. With Lt.-Col. Sakdi as Head and Major Luang Arwut as second-in-command, it consisted of a flying section, a flying school to train new pilots, and a workshop. Instruction of flyers on home ground had been an important part of the scheme from the beginning, and even before the move to Don Muang the Ministry had begun accepting applications. Eight army officers were selected for the first class, five of whom passed through the course successfully in 1915.

In view of the difficulties presented by trying to obtain spare parts from distant Europe, Colonel Praya Chalern Akas — a special title given to Lt.-Col. Luang Sakdi in June, 1914 — set about obtaining material and personnel for Siam to build his own aircraft.

The first attempt, a copy of a Nieuport constructed of local wood, was not flown but used to taxi on the field. The first Thai-made plane to leave the ground was a Breguet biplane, which was successfully test-flown by Colonel Chalerm Akas on May 24, 1915.

The Army began using aircraft for reconnaissance, flying at 500 to 800 meters, toward the end of 1915, and early the following year they were used on a much larger scale during maneuvers held at Ratchaburi, south-west of Bangkok.

Four Breguets under Colonel Chalerm Akas were assigned to one side in the mock combat and four Nieuports under Major Tayan Pikat to the other, enabling the Army to gain valuable experience in the deployment of aircraft and operational procedures.