Loy Krathong is a unique Thai festival when you can send your bad luck, guilt, negativity and pretty much everything rotten about your life down the river or out to sea. The festival dates depend on the moon calendar. In 2018 the full moon day occurs on Friday November 22rd.

The tradition of Loy Krathong has been observed in Thailand for no less than 700 years since the Sukhothai period (1238 – 1438). It is based on a Hindu tradition of thanking the Water Gods for the waters (Pra Mae Khongkha) or as homage to the legendary footprint the Buddha left on the bank of the River Narmada in India.

One year, a beautiful woman called Noppamas, who was the chief royal consort, made some special lanterns for the festival. She made them from banana leaves and shaped them like lotus flowers. The King was impressed and announced that Krathongs would be floated on the water every year. Loy (float) Krathong (container) occurs on the evening of the full moon of the 12th month in the traditional Thai lunar calendar, which is November 22rd this year. The full moon shining on waterways which are flooded after the rainy season makes this one of the most beautiful and popular festivals in Thailand.

During the evening, many people will go to their local klong (canal) or river to float their Krathongs. They believe this will bring them good luck and is a symbolic way of letting go of all grudges, anger, and negative thoughts so they can restart their life fresh on a better foot. Krathongs contain a flower, a candle and three incense sticks which are lit before being placed on the water. In the old days people also trim their nails and put a bit of hair in the Krathong, wishing that it will take the bad luck and illness away. A few added coins may appease the great water gods.

The people usually make a wish at the same time. Some people believe that if the candle remains burning until the Krathong is out of sight then their wish will come true. Alternatively couples release one Krathong each, hoping they will float away together, a sign of everlasting love. By the end of the evening, there are hundreds of flickering lights bobbing up and down on the water. Quite often there are also firework displays as well as shows. Overall it is a really memorable evening.

On the beach, a more modern trend is to release flying lanterns and a pretty impressive sky can be seen at night. Around Hua Hin and Cha – Am there will be plenty of eating and partying at local venues. Just head for the beaches and waterways to be involved. The most popular locations for local people is where a waterway flows into the sea. Khao Tao is also a popular Hua Hin local venue where many people gather to send their out to the open ocean. 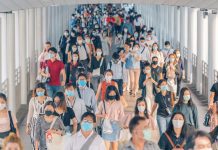